Banjo-Kazooie: Nuts & Bolts is the third game in the Banjo-Kazooie series, taking place eight years after the events of Banjo-Tooie. It was announced at Microsoft's X06 in 2006 at Barcelona, Spain and was released on November 11, 2008. [1] Before the name was finalized, the game was commonly referred to as Banjo-Threeie. It is the first game in the Banjo series which is unaffiliated with Nintendo, as it is exclusive to the Xbox 360. In early 2009, L.O.G.'s Lost Challenges, a DLC for the game, became available for 400 Microsoft Points. See also the Banjo-Kazooie: Nuts & Bolts debut video here.

Set 8 years after Banjo-Tooie, the plot of the game involves Banjo and Gruntilda competing to determine the true owner of Spiral Mountain. Banjo wishes to preserve his home while Gruntilda hatches an urban development scheme to replace the vegetated area with towers and malls. A new character named Lord of Games (also known as LOG) attempts to settle the conflict between the two by devising a series of worlds and challenges. LOG transports the other characters to Showdown Town, his headquarters, and starts the contest. The winner would be set to own Spiral Mountain; the loser must endure eternal hardship working at LOG's video game factory. While Banjo and Kazooie seek to win by completing the challenges, Grunty uses a slew of vehicles she presumably has built, as well as an army of mechanical Gruntbots to stop the duo from succeeding. [2]

The game is not a traditional third-person action and platform game like the previous entries in the series, but instead utilizes vehicles to transport Banjo and Kazooie around the levels and complete challenges for Jiggies. According to Mayles about 20 percent of the game retains traditional platforming elements. There are however no conventional "moves" for Banjo and Kazooie to use. The duo are limited to only jumping and attacking with a magical wrench while other abilities, such as firing eggs have been mapped to vehicle parts instead.

Vehicles play a prominent role in the game. The player can build them from over 1,600 components available, such as body panels, engines, wheels, wings, propellers, fuel and weapons. Vehicle presets are available as blueprints. Vehicles can be created when starting a challenge as well so as to make the perfect vehicle with which to win.

The game still requires the player to collect Jiggies in order to progress and open up new worlds, there are 131 Jiggies to collect in all. Notes are also scattered aroung the worlds and the hub, they are used to buy parts and blueprints and have several other functions. There are no note doors to open though. There are three different types of notes that are worth different amounts. From greatest to least they are gold, silver, and bronze. A new item, tentatively called "Mumbo's magic wrench" is also used in the game. It plays a significant role, as it is used to both build and move objects via a yellow beam fired from the device. The wrench is also used by Kazooie as a primary weapon for on-foot gameplay, which allows the breegull to attack nearby enemies by spinning around in a circle from inside Banjo’s backpack.

Various abilities from Banjo-Kazooie and Banjo-Tooie will not be at Banjo and Kazooie's disposal for Banjo-Kazooie: Nuts & Bolts. This approach was first mentioned in the December 20 of Rare's Scribes column, which stated, "Banjo and Kazooie haven't got many of the abilities that they used in previous games".[8] The ability introduced in Banjo-Tooie to split up Banjo and Kazooie as separate playable characters will be unavailable in Banjo-Kazooie: Nuts & Bolts. A previous Scribes mentioned that they "thought about using two different controllers" to account for the new moves and all the old moves as well, but that a simpler system had been used for the game. It was eventually revealed that the approach involves using vehicles instead of the previous attack moves. According to Rare, the in-game explanation is that most of the older abilities were forgotten after eight years of not using them and LOG did not allow the duo to remember them. The only move you can still do are the Grip Grab (no attack), Swim (Banjo only), Climb, and Single Jump. The Magic Wrench is used as a new attack, for the platforming elements of the game.

The player can disembark from a vehicle and explore the environment in a manner similar to that of the previous games. In a screenshot, Banjo and Kazooie are seen walking on a tightrope crossing a river.

The idea of multiplayer options was first discussed at the Rare Witch Project, where Mayles said that there would be multiplayer capability in the game unlike that found in Banjo-Tooie. He also noted that there would not be any first-person shooter sections in the traditional action-adventure game. It was later revealed that multiplayer will be purely vehicle-based where players will be able to take their custom built vehicles to Xbox Live and compete in online races and activities. An announcement stated that the game features a co-operative mode and offline multiplayer options.

Many levels have been introduced in Nuts & Bolts, many new, while some old levels from previous games being redesigned in a whole new way.

There are 6 new levels (not including Showdown Town and Spiral Mountain). Each new world is split into 6 acts each with a number of Jiggies obtainable (L.O.G.'s Lost Challenges has no Jiggies to obtain, since they go to the picture). Like the other console games, the levels can be accessed from the hub world and themed music will play when neared. Each world has its own intro that plays when you enter the world for the first time.

During the game, you will see a lot of things that are references to other Rare games, consoles, and gaming things such as:

At the opening movie, when Banjo is eating pizza and Kazooie is playing the Xbox 360, the radio is playing the tune from the Windy level in Conker's Bad Fur Day.

Gavin Price, multiplayer designer of Banjo-Kazooie: Nuts & Bolts, was also interviewed and expressed interest in developing a Banjo-Fourie for the Xbox 360, after the issue of Banjo-Threeie's release during November 14-18, 2008.

To quote him: "We are still thinking of a lot of other new features and I think we were told 'you going to do a sequel' then there would be a hell of a lot just new ideas." Filecchio Savior, the programmer, who has been with the original Banjo-Tooie team echoed: "Yes, lots!" Neil Harrison, lead technical artist, added: "Yes there would be a lot of stuff we like to do."

September 9th UPDATE: Rare senior animator Ellipse Miller said in an interview that "[Nuts & Bolts] is like an introduction to what we could do. If we went and did some 'of us could push it. You can was accepted and people are so we can certainly push it in one direction much greater. This is like the opening of a new type of game I think. "

Rare lead technical artist Neill Harrison added that the team has a rare few "crazy ideas" for more Banjo mechanical work, and that will "probably" expand the concept of construction for future games.

"[Lead designer] Greg has had some crazy ideas [for the next game] ... I'll probably get in trouble if I mentioned them," added Harrison. "I think if [Nuts & Bolts] was successful, we certainly had a load of ideas for what could be done with the same kind of concept but expand it out.

So, what's next for Rare? Outside of the new Xbox 360 avatars, who are working on unannounced games. Schuneman Lee, director of manufacturing a rare, says: "Usually it is probably in about four or five titles, so there is certainly some that we have not yet spoken. And some of those who perhaps never will, because Sometimes we try out ideas and do not always come out on the market, but there's a good few."

Japanese box art.
Add a photo to this gallery 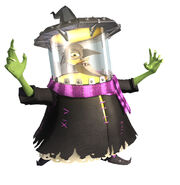 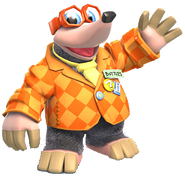 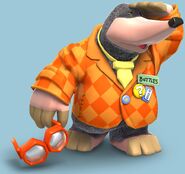 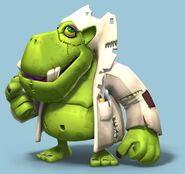 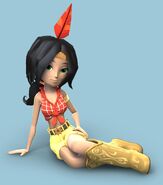 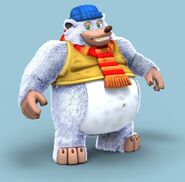 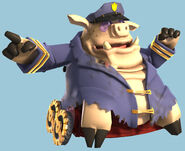 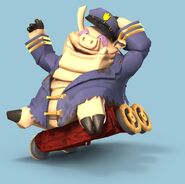 An orange Jinjo.
Add a photo to this gallery 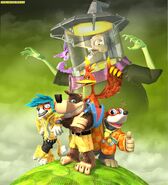 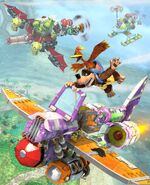 Banjo, Kazooie, Klungo and Mr. Fit in a plane race. This is the Soundtrack cover too.
Add a photo to this gallery

Gruntilda and her minions' wallpaper.
Add a photo to this gallery

Retrieved from "https://banjokazooie.fandom.com/wiki/Banjo-Kazooie:_Nuts_%26_Bolts?oldid=26519"
Community content is available under CC-BY-SA unless otherwise noted.