Banjo-Kazooie was ported to the Xbox Live Arcade on December 3, 2008. The game is essentially identical to its N64-based original but with some minor differences, like the obvious change of controls and the existence of an online leaderboard, in which the state of completion of the game and the needed amount of time are recorded. The graphics are also slightly improved as well as the animation of each character's movement that they make. The original graphics of the N64 remain, but the textures are now high resolution. The only major changing in the graphics is the icon of Banjo and Kazooie next to the healthbar. Notes, once collected, don't appear again, if one exits the level and reenters it or loses a life. Another obvious change is the removal of Nintendo and Rareware references which gets replaced with Microsoft and Rare Ltd. The dialogue text uses a different font, which happens to be the same initial font used in Banjo-Kazooie: Nuts & Bolts.

In Banjo-Tooie, players can bring the eggs to Heggy's Egg Shed where Heggy the Hen will hatch them and unlock in the following order, a new Gamer Pic, a special Banjo-Kazooie theme for the XBOX Dashboard, the Homing Eggs cheat for Cheato, the ability to use the Breegull Bash, Jinjo as a playable character in multiplayer mode, and the "Oh no, not again..." achievement for Stop 'n' Swop II, and they can use the Ice Key at Glitter Gulch Mine to open an ice safe containing a Mega-Glowbo, which can be brought to Wumba's Wigwam at the Isle O' Hags and used to unlock the Dragon Kazooie transformation.

In Nuts & Bolts, for each item, a crate will appear next to a picture of the obtained item in Showdown Town, which can be brought to Mumbo's Motors to unlock a special customization item. Additionally, if a player has all three games, and downloads the L.O.G.'s Lost Challenges DLC for Nuts & Bolts, then they can unlock special blueprints by using the items in Banjo-Tooie.

Banjo and Kazooie in Bubblegloop Swamp.

Kazooie using the Wonderwing to protect Banjo inside Clanker.

Banjo in Freezeezy Peak about to take flight. 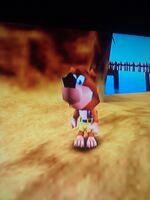