Banjo-Kazooie Wiki
Register
Don't have an account?
Sign In
Advertisement
in: Characters, Characters from Banjo-Tooie, Banjo-Tooie worlds,
and 6 more
English

Rumble Pack (Nintendo 64)
Banjo-Tooie is the second game (third in time line) in the Banjo-Kazooie series and is the sequel to Banjo-Kazooie: Grunty's Revenge (in time line). Development for the game started even before the original Banjo-Kazooie was released. The game was developed by Rareware and released for the Nintendo 64 on November 20, 2000 in the US, November 27, 2000 in Japan, and April 12, 2001 in Europe.

Banjo-Tooie takes place two years after Gruntilda was defeated by Banjo and Kazooie in the first game. In this game, Banjo and Kazooie have to stop Gruntilda's sisters, Mingella and Blobbelda, from restoring Gruntilda's body to its original form. This game introduced some darker elements to the series, such as the death of Bottles.

On a dark and stormy night, two years after Gruntilda's defeat, Klungo continues his ongoing two-year effort to free the witch from beneath the boulder that crushed her following the final battle with Banjo & Kazooie in the previous game. Meanwhile, Banjo, Kazooie, Bottles, and Mumbo Jumbo are playing poker together at Banjo's house, with Kazooie constantly cheating, such as claiming Grunty's return so that she could steal some poker chips.

Suddenly, Spiral Mountain experiences tremors like that of an earthquake, which disrupts Banjo and friends' game. The tremors were caused by a massive digging machine called the Hag 1, piloted by Grunty's sisters, Mingella and Blobbelda, who have come to rescue their sister. After the quake, Banjo says someone should go investigate. Kazooie claims to be too scared, so Mumbo bravely decides to go. Kazooie then reveals she was faking so she can steal some of his chips.

When the witches arrive, Klungo expresses his grief of failing to save his mistress, but her sisters assure they got it covered. They use a spell to destroy the boulder trapping Grunty and reviving her from the dead, but as she climbs out, they realize she has withered away to nothing but an animate skeleton with robes. Grunty is not pleased about being a walking corpse, but Mingella and Blobbelda reassures their sister that they have a plan to restore her body, and she must come with them back to their castle. Having witnessed Grunty's escape from the boulder, Mumbo bolts back to the house, but is seen by the witches.

The skeletal Grunty runs after him, firing spells rapidly. Upon reaching the house, Mumbo rushes inside to warn Banjo, Kazooie and Bottles. Grunty then starts charging a powerful spell to destroy them all. Banjo & Kazooie see Gruntilda, and leave at once with Mumbo, but Bottles, believing it to be another trick, stays put and ends up getting obliterated along with the house. The witch sisters then leave Spiral Mountain in the Hag 1, heading for their castle, leaving behind some minions to destroy the area as well as Klungo.

The next morning, Banjo, Kazooie and Mumbo observe the damaged state of Spiral Mountain and their house. They witness Bottles crawling out of the ruins, dying and becoming a ghost. Mumbo is outraged by this turn of events and swears revenge. He tells Banjo and Kazooie to go after the witch before leaving behind the duo. Kazooie is excited to have another chance to beat Grunty again, but Banjo worries that this new adventure will not be as easy as the last one.

The duo follow the Hag 1's tracks into a cave, encountering Klungo, who attempts to impede them. After defeating the dim servant, who leaves to be violently punished by Grunty, they continute following the Hag 1's trails, leading them through various areas of the Isle O' Hags, the island on which Spiral Mountain & Grunty's lair is located, and the game's hub world. They arrive in Jinjo Village, where the Hag 1 has also caused trouble, flattening the house of the grey Jinjo family (one of the ten families residing in the village), and killing them. Banjo and Kazooie continue on, to the Royal Jinjo Palace, where King Jingaling, resides. The ravaging of Hag 1 scared the jinjos off, and King Jingaling requests the duo's help in gathering them back in the village. He informs them of Master Jiggywiggy and the ancient order of the Crystal Jiggy, which is crucial to their quest. He then gives them a Jiggy to help them get started, and opens a secret passage to the Isle O' Hags.

While Banjo & Kazooie stop to discuss the encounter, Gruntilda and her sisters have arrived at Cauldron Keep, their lair. Mingella and Blobbelda introduces the B.O.B., Big O' Blaster, which can suck the life force out of any living thing. They intend to store large amounts of life force in a tank, and have Grunty shower in it, restoring her old body. Grunty decides to steal King Jingaling's life-force, as he just helped Banjo and Kazooie, and decides to deal with the rest of the Isle later. A beam is fired, making Jingaling's golden palace dead as a rock, and turning Jingaling into a zombie. Grunty reassures her sisters that with Bottles dead and Jingaling zombified, Banjo has no hope of reaching Cauldron Keep in time. Banjo and Kazooie, still outside the palace, narrowly miss the beam, and realize that the situation is much more desperate then previously anticipated.

They continue to Bottle's house, where his family are waiting for him. Kazooie has no problem telling the family about Bottle's death, but Banjo convinces her not to. Using the passageway King Jingaling opened, they make their way to the Isle O' Hags.

The two soon find the (closed) entrance to the first level, Mayahem Temple, and Master Jiggywiggy's sacred shrine. They learn that Jiggywiggy is a powerful sorcerer (with a Jiggy-shaped head), who will help them on their adventure by opening worlds, but they need to gather jiggies to prove themselves worthy. With the first Jiggy at hand, they can start, and Mayahem Temple is opened.

On their journey they collect a total of 90 Jiggies, and receive help from old and new friends. They often stumble upon Mumbo's hut, where he agrees to go out and use his magic to solve puzzles and open passages for them. They also encounter Drill Sergeant Jamjars, Bottles' military brother, who agrees to teach the duo new attacks (if, of course, they can present the proper number of musical notes). They also meet Humba Wumba, a female shaman and Mumbo's arch-rival, who requests magical Glowbos in exchange for transforming Banjo and Kazooie into something else (thus taking on the role Mumbo had in Banjo-Kazooie). They travel to various locations, such as Glitter Gulch Mine, Witchyworld, Jolly Roger's Lagoon, Terrydactyland, Grunty Industries, Hailfire Peaks and Cloud Cuckooland.

Finally, the pair reaches Cauldron Keep. After facing her henchman Klungo for the last time, Grunty traps the duo in her "Tower of Tragedy" quiz, where where she asks a series of questions based on the Banjo's current adventure (much like in Grunty's Furnace Fun), but only ends up mercilessly killing off her sisters for losing. After surviving the lethal game show, they hurry upstairs to reverse the effects of B.O.B., thus reviving Bottles and Jingaling.

They then rush to the top of the tower and face off against Grunty with both her magic and Hag 1 machine, as well as answer a few more questions. After the duo eventually disable the Hag 1, Grunty resorts to using her most powerful spell (likely the same one she used to destroy Banjo's house and kill Bottles (and maybe even the same one she tried to use as she fell from her lair in the first game)), but they shoot one last egg at her, causing the witch to drop her spell in the Hag-1. The explosion destroys the machine along with most of her weak, skeletal body, leaving her nothing more than a talking head.

Banjo and Kazooie return to the Isle o' Hags to celebrate with their friends, including the now reformed Klungo, but they arrive too late as the party was already over. Kazooie then suggests a new fun idea: kicking around Grunty's head atop Cauldron Keep, much to their joy and her disgust. She vows to have her revenge in the game's sequel, "Banjo-Threeie"

Differences in gameplay from Banjo-Kazooie 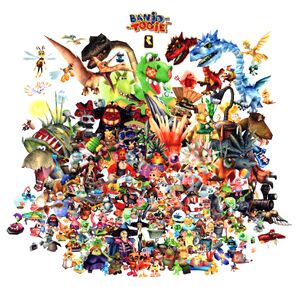 Just like the previous game, there are nine worlds, one overworld/hub world, and one starter world. This comes to a total of eleven worlds in Banjo-Tooie

Banjo-Tooie was critically and commercially successful upon the time of its release. The scores were consistently very high, rivaling its predecessor Banjo-Kazooie. IGN praised the multiplayer system and its characters but criticized the graphics for framerate speed issues during certain points in the game.

4J Studios, the developer that worked on the Xbox Live Arcade version of the original N64 Banjo-Kazooie game, was commissioned by Rare for the new version of Banjo-Tooie. A trailer for Banjo-Tooie was added to the Xbox Live Marketplace on April 10. The video, entitled "Happy Easter Banjo-Tooie" shows more of the game's Stop 'N' Swop features with Heggy and the eggs. It was released with gamer pictures featuring the six eggs and ice key, including three new eggs: silver, brown, and orange. On April 11, a premium theme was also released.