Start a Wiki
Boggy is a large, rather rotund polar bear that loves sledding. He tends to eat a lot and of eats Jiggies which he has to cough them out. He has three kids: Soggy, Moggy, and Groggy, as well as a wife.

He is first seen in Freezeezy Peak lying on the ground near his Igloo saying he ate something. After getting up the snowman, you can use the sled to sled down the snowman's scarf and land on Boggy making him cough up his first Jiggy, literally. He then goes to the start of the first race with two sleds. Race him as a Walrus and win to obtain the second Jiggy. Then go to him in the same spot as he was during the first race and race him as Banjo (make sure you know how to use the Turbo Talon Trot first) and win to get Boggy's third Jiggy. After this, he will return to his igloo to be with his kids.

In Banjo-Tooie, Boggy and his family have moved to an igloo in the icy side of Hailfire Peaks. All he does now is sit in front of the TV and eat and as a result he has gained a lot of weight, which his wife casually points out. He's hungry, so he asks you to get him some food. Banjo has to use the Shack Pack to enter a boiling hot pool of water, get a fish. After eating the fish he burps out a Jiggy and decides to give it to you because he can't eat it.

It should be noted that even though Boggy's appearance has changed drastically between Banjo-Tooie and Banjo-Kazooie: Nuts & Bolts, he still wears his orange and red scarf, although the pattern changed from boxes to stripes (perhaps as a reference to Freezeezy Peak's giant snowman who wore the same type of scarf). Along with the scarf, he is also wearing a yellow vest and a blue hat. He is a challenge host in Banjoland, the Jiggoseum, and the Terrarium of Terror.

Boggy runs a gym in the hub world of Showdown Town. Banjo can come here to get a boost in his speed, strength, or stamina. Boggy talks about wanting to expand his business online, as that is popular thing to do. He wears his typical outfit in this world.

Boggy acts as the a janitor in the museum. He is highly unmotivated and never does his work, much to Bottles' chagrin. He wears a green vest and hat to fit the clothes of the other employees. He hosts challenges in Acts 2 and 6. He firsts asks Banjo and Kazooie to clean up trash around the giant trash can, as he does not want to do it. Later on, he has to help his wife move by knocking all of the ice blocks off his igloo. He again enlists the help of Banjo and Kazooie to help accomplish this task.

Boggy appears here as a competitor, although he doesn't seem to be in the running for a gold. He hosts challenges in Acts 2 and 6. He firsts challenges Banjo and Kazooie to knock down dominoes lined up in a circle. Later he challenges them to a game of darts that makes use of the entire stadium. His challenges are more about strategy than speed or strength, possibly because he possesses neither.

Boggy poses as an alien in this world. He has green fur and a helmet that makes him appear to have human eyes. Although Kazooie questions his identity as an extraterrestrial, he remains determined about his alien hood. He appears in Act 2 and again in Act 3. His first challenge has Banjo reliving the Saucer of Peril from Witchyworld. In Act 3, he needs the pair to rescue his alien friends in the bottom of the terrarium. Interestingly, he appears twice in Act 2, as one doppelganger poses as an alien robot named B-066Y. He asks you to remove a toxic ball before the air becomes polluted. Kazooie doubts that Boggy has a robot clone, something which she is more than likely correct in thinking. 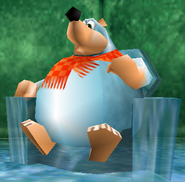 Boggy from Banjo-Tooie.
Add a photo to this gallery 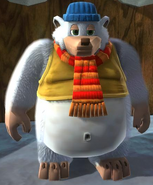 Boggy in Showdown Town.
Add a photo to this gallery
v •  e

Retrieved from "https://banjokazooie.fandom.com/wiki/Boggy?oldid=44150"
Community content is available under CC-BY-SA unless otherwise noted.