Banjo-Kazooie Wiki
Register
Don't have an account?
Sign In
Advertisement
in: Characters, Characters from Banjo-Tooie, Characters who break the fourth wall,
and 5 more

Dream: Land of Giants
Banjo-Kazooie (XBLA) (Cameo)
Banjo-Tooie (XBLA)
Banjo-Kazooie: Nuts and Bolts (Cameo)
Captain Blackeye is a curious character who sits in the back room of Jolly Roger's Tavern in Jolly Roger's Lagoon. He appears to be a pirate and he drinks perpetually. Captain Blackeye rants continuously about how a bear who looked just like Banjo (or so he believes) stole his glory.

His purpose in Banjo-Tooie is very minor. If the player talks to him three times, he will threaten to attack Banjo and Kazooie if they do it again. On the fourth attempt, he will try to attack the duo (as implied by his dialogue), but being too seasick he falls over onto his back, so instead he gives Banjo and Kazooie two Doubloons to fetch him a glass of water. However, he then faints in a comical fashion and can still be talked to as he spouts off his infamous remarks.

Captain Blackeye was also meant to appear in the first version of Banjo-Kazooie, which was titled Dream: Land of Giants. He was expected to be the main antagonist in the game but it was never released due to slow development issues. In Banjo-Tooie, he commonly recites the words, I had a dream once... This is a reference to his role in Dream: Land of Giants, while 'a bear stole me glory' references how the game was reworked into Banjo-Kazooie, stripping Blackeye of his main villain role.

He makes a cameo appearance in Banjo-Kazooie: Nuts and Bolts on the Boot in a box weapon. His picture is also on a wanted poster and there is also a shop called "Blackeye's Boat Hire" near the Logbox 720 doors.

If Banjo and Kazooie choose to interact with him again: 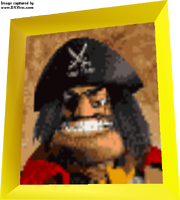 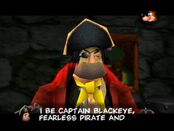 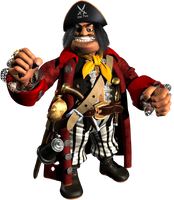