Captain Blubber is a sea hippo who is the Captain of The Salty Hippo.

In Banjo-Kazooie, Treasure Trove Cove level, Captain Blubber lost his treasure and needed Banjo and Kazooie to go recover it (strangely enough, both pieces of treasure are in his ship.) One part is in the front half of the ship, which can be reached by swimming in the little pool and through the side of the ship. The second part is in the back half of the ship, which can be retrieved by Beak Busting a small wooden box-like object to make a hole in the ship's deck. Ironically, Blubber can't get it himself because he can't swim. At the end of Banjo-Kazooie, Captain Blubber is seen riding a wave racer into the sunset.

In Banjo-Kazooie: Grunty's Revenge, Captain Blubber appears in Breegull Beach as Little Blubber, a younger, past version of himself. He and his crew challenge Banjo to a game, where he must use his ship to hang onto a treasure chest longer than Blubber and his crew.

In Banjo-Tooie, Captain Blubber owns a somewhat unsuccessful shop where he gives Banjo a pair of Turbo Trainers in exchange for 1 doubloon. He then runs out of the store leaving a Shock Jump pad so that Banjo and Kazooie can get the Jinjo in the rafters. You can also use the Turbo Trainers to get the Jinjo in an alcove at the far end of the lagoon. His ship, the Salty Hippo, is sunken in Banjo-Tooie. At the end of the game, Captain Blubber is seen riding the Saucer of Peril (he is too big to fit inside so he is hanging on to the controls) into the sky above Cauldron Keep. A parody of the song from Treasure Trove Cove is played.

In Banjo-Kazooie: Nuts & Bolts, Captain Blubber crashes the Saucer of Peril in Showdown Town (although, you do not see him crash; you can actually find the Saucer stuck in the ground near Uptown). He appears in Banjoland, the Jiggoseum, and the Terrarium of Terror.

He stands at the Uptown area of Showdown Town, where he will sell you a Trapdoor Tower combination. He wears his normal clothes but they are dirty because he is still down on his luck.

Blubber acts as himself in this world. He wears clothes similar to his normal attire, but with a golden Jiggy on his belt. He host challenges in Acts 1 and 6, although he appears in other races and challenges. He first wants Banjo to protect Clanker's eyeballs. He later warns that Mr. Patch has been revived and you must stop him again. He is still a happy sailor and is always happy to see the bear and bird.

Blubber appears as a water sports enthusiast, rather ironic seeing as very little water appears in the Jiggoseum. He wears a bandanna, goggles and a life preserver around his waist. He host challenges in Acts 3 and 6. He first wants Banjo to prove his strength by lifting bowling balls. Then he wants to light the Jiggoseum torch. Blubber seems a little upset over the lack of water but doesn't let it affect his still cheerful spirit.

Captain Blubber acts as the great space explorer, "Captain Flash McBlubber". He wears a space helmet in this world. He hosts challenges in Acts 2 and 3, but is still a common sight in other character's challenges. He first wants to race Banjo in a land and air race.

He later wants Banjo to test his new vehicle, the Super Sally. Blubber acts a bit more arrogant in this world, as he is a great adventurer, but is still the bumbling hippo from the past. 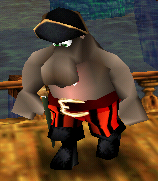 Banjo up against Little Blubber and his gang in Banjo-Kazooie: Grunty's Revenge.

Blubber in the intro to Banjoland in Banjo-Kazooie: Nuts & Bolts.
Add a photo to this gallery
v •  e

Retrieved from "https://banjokazooie.fandom.com/wiki/Captain_Blubber?oldid=43964"
Community content is available under CC-BY-SA unless otherwise noted.