Cheat Codes in the Banjo-Kazooie series are usually in the form of word or sentences entered in special locations, often enhancing the abilities of Banjo and Kazooie. Some codes can be learned within the game itself, such as codes given by Cheato or other characters. ASM codes in the game source code are hackable to change the game's behaviors with hexidecimal values and opcodes (when debugging roms), but some of them that are altered may crash the game.

Cheats from Banjo-Kazooie can be entered on the Sandcastle floor in Treasure Trove Cove once the Jiggy has been collected. With the exception of the codes learned from Cheato and the Stop 'n' Swop codes, the effects of most of these codes is temporary and they must be re-entered after quitting and opening the file again.

Warning: With the exception of the codes given to you by Cheato and Bottles, using cheat codes in the XBLA version of Banjo-Kazooie disables saving and does not post your score onto the leaderboards. Once the code is entered, Bottles will ask you to confirm whether or not you really want to use the cheat.

Each unlocked by finding Cheato in one of three locations within Gruntilda's Lair. The codes can be used multiple times, but they will only double your maximum stock on the first use.

Unlocked by playing Bottles' Moving Picture minigame. Effects will disappear after quitting. Furthermore, the minigame must be played again to be able to use the cheats again.

Note:all codes are separated for ease of viewing. The cheat is all one word, so be careful when entering them.

Enter these and events related to the fabled Stop 'n' Swop will be triggered.

Codes that are not found within the game and can be used any time. Many of them are most likely debug codes implemented to help game testers work out bugs in the game quickly. The word CHEAT must be entered at the beginning of each code, and a moo will be heard with each letter of the word CHEAT. No sound effects will play while entering the codes themselves except for a final moo when the code is completed. Remember these will stop working once you save and quit.

Warning: Do not attempt to use these cheats if you are using the Xbox 360 arcade version unless you do not care that nothing will be saved after the point of you entering any of the following codes.

Warning: Do not attempt to use more than two open world/note door cheats in a row. You will be presented with a warning after using three cheats that your game file will be erased if you choose to proceed, and unlike Bottles' unbacked threats of erasing the entire game pak for pestering him in Spiral Mountain, your game file will most definitely be erased. (Oddly enough, this doesn't seem to work on the Xbox 360 version.) If you need to use more than two cheats, save and quit before entering the third. If you want to open worlds and note doors which bypasses this, use the Gameshark codes that are provided in the game codes websites that does this.

Cheats from Banjo-Tooie can be entered on the Code Room wall in Mayahem Temple. After a correct code has been entered it will be saved on the code list on the right side of the room. There, each code may be toggled on or off. All of these cheat codes are permanent when toggled on. Most of the cheat codes do not need to be unlocked to enter them, but require entering CHEATO before the desired cheat code and the code itself to be entered backwards; for example, "EGGS" would become "CHEATOSGGE".

Warning: When you put CHEATO before the desired code and input the code backwards for any codes, Jamjars will warn Banjo that if the code is activated, saving will be turned off and your scores won't be posted to the Leaderboards (XBLA).

Unlocked by bringing the Blue Mystery Egg to Heggy and allowing her to hatch it.

Given randomly when visiting Madame Grunty.

The codes below must always have the player enter CHEATO before the cheat code (the code itself is NOT entered backwards).

The far right Signpost behind Jiggy Wiggy's Temple reads, "An egg container followed by Jingaling?" This is translated to be "Nest" and "King".

Warning: After inputing this code, Jamjars will warn Banjo that if the code is activated, saving will be turned off and your scores won't be posted to the Leaderboards (XBLA)

A number of Gameshark codes that are usually not in the game are more advanced and can be ported without any need to use cheats that are put in the game by the developers. These codes were made by hackers to allow players to retain health and not lose any and other hacks that the developers didn't intend to be used. There's framerate cheats that are taken from their cut-scenes and locations such as the Cheese Wedge for Banjo Tooie and are ported as an improvement for the game's framerate change from it's original 30p to 60p with these codes:
802808DF 0000 - Banjo Kazooie[1]
8007913C 0080 - Banjo Tooie[2]
[3]
The other codes involved in exploiting these Banjo Kazooie N64 games can be found in the following games for Gamehacking.org:

These will also allow them to bypass anything that will disable any other features. However, some of the codes require the Master code in-order to work.

Large Banjo and Kazooie with the modified size cheat code.

Shock Spring Jump in any place without a shock pad.

Swimming with the Walk Through Walls code by Gameshark. 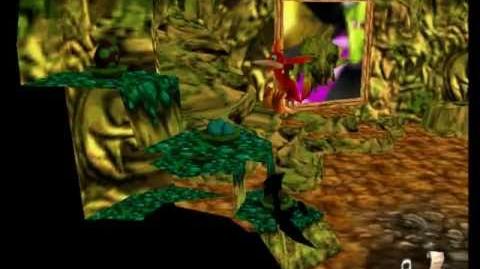 Banjo and Kazooie flying in Grunty's Furnace Fun with the help of the fly anywhere place Gameshark cheat code. 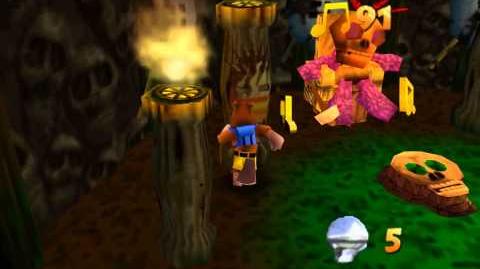 2.35:1 Aspect Ratio via WS cheat code created by a fan.
Add a photo to this gallery

Retrieved from "https://banjokazooie.fandom.com/wiki/Cheat_code?oldid=45405"
Community content is available under CC-BY-SA unless otherwise noted.