“Hey! I don't recall you paying for a tour of my volcano! I'm gonna burn your furry hide...”
—Chilli Billi, Banjo-Tooie

Chilli Billi is a fiery red dragon with a long neck, a comparatively tiny body and is the boss of the Lava Side of Hailfire Peaks. He lives at the top of the volcano on the lava side. He is the brother of Chilly Willy, the boss of the Icy Side of Hailfire Peaks. Similarly, he has a big head and a small body like his brother. If fought before Chilly Willy, he will have 6 HP; if fought after his brother, he will have 12 HP.

If he is fought first, he assumes Banjo and Kazooie came to deliver his "12-Foot Spicy Meat Special Pizza." However, Kazooie tells him they do not have his pizza, so Chilli Billi says he will eat them instead. If he is fought after Chilly Willy, he remarks that they must be the same bear and bird that defeated his brother. Kazooie says that his brother tried to eat them. He says that he had also ordered a pizza and, seeing that the bear and bird have none, decides to attack them. Similarly, if Banjo and Kazooie fight him after being defeated by Chilly Willy, he says that his brother told him about them and then he will attack.

He attacks by spitting balls of fire. The only way to damage him is to shoot Ice Eggs into the large cannons that appear around the volcano (which can also be used as cover from the fireballs). These will in turn blast gigantic ice eggs at Chilli Billi. The cannons disappear after each of them has hit Chilli Billi three times. After he is defeated, Chilli Billi decides to get a takeout instead. If Chilly Willy was fought first, Kazooie stops him, saying that since they have beaten both of them, they should get a trophy. Chilli Billi replies, "A trophy huh? Well, all I got is this..." and gives them a Jiggy. He then flies away deciding to get some of Big Al's Burgers.

Hey! I don't recall you paying for a tour of my volcano! I'm gonna burn your furry hide...

Chilli Billi: Ah... At last! You must be the pizza delivery boy.
Banjo: No, just the local Jiggy hunters.
Chilli Billi: Lies! I bet you've got my 12-foot Spicy Meat Special in that backpack.
Kazooie: 'Fraid not, wartface.
Chilli Billi: Then I'll eat you instead!

Chilli Billi: You must be the pizza delivery boy that beat up my poor brother!
Banjo: He tried to eat us.
Kazooie: I suppose you'll be wanting pizza too?
Chilli Billi: Yes, please. I ordered a Spicy Meat Special.
Kazooie: Well, tough. We've got none.
Chilli Billi: I'm sure you have! Give me my pizza!

Chilli Billi: Have you got my Spicy Meat Special Pizza yet?
Banjo: Sorry, no.
Chilli Billi: Then I'll feast on your furry hide once more!

Chilli Billi in his lava pool. 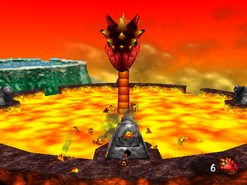 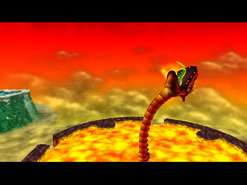 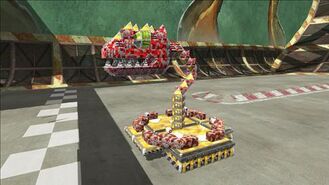 A Nuts and Bolts homage to Chilli Billi.
Add a photo to this gallery
v •  e

Retrieved from "https://banjokazooie.fandom.com/wiki/Chilli_Billi?oldid=44727"
Community content is available under CC-BY-SA unless otherwise noted.