Chuffy was a Train that was used in Banjo-Tooie. The train is operated by Old King Coal. It is orignally found in Glitter Gulch Mine. However, Chuffy had fallen off its tracks, and Mumbo needed to use the Mumbo Pad in front of the fallen train to put it back on the tracks. Afterwards, Banjo and Kazooie entered the train and attempted to use it, but the trains owner, Old King Coal stated that they would have to fight him to use his train. A boss battle inside the boiler ensues, and once the duo claimed victory, they were free to use Chuffy as they liked. To use Chuffy, Banjo and Kazooie had to open stations in each world by finding a Train Switch. Not all worlds had a train station. Once activated, they needed only to stand in front of the side sign by the tracks to have Old King Coal bring Chuffy to the station. Banjo and Kazooie used Chuffy quite a bit to transport different characters, obtain certain Jiggies and travel quickly between worlds. Chuffy had to be used to sneak into Grunty Industries as the entrance was locked from the outside. Chuffy is not able to travel to Hailfire Peaks Ice Side until Chuffy's boiler is cooled, as Old King Coal says if they do not cool it before they enter the Ice Side, the drastic change in temperature would damage Chuffy's engine. So Banjo and Kazooie had to bring the train to the Fire Side climb up to a platform above the train and Beak Buster Gobi's hump to have him pour water into Chuffy's boiler. 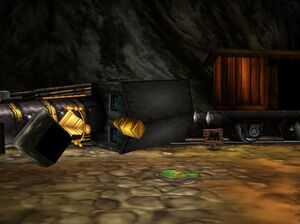