Next up, Pollution! Unfortunately, Banjo and Kazooie are forced to enter this nasty world and get dirty. They also meet Clanker here. Clanker's Cavern is the third world accessed from Gruntilda's Lair in Banjo-Kazooie.

Note that in order to get Jiggy 4 to 10, you must first raise Clanker

Jump down into Clanker's blow-hole. Causes the eyes on Grunty's portrait floor to raise up. 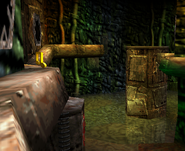 Retrieved from "https://banjokazooie.fandom.com/wiki/Clanker%27s_Cavern?oldid=17107"
Community content is available under CC-BY-SA unless otherwise noted.