Conga the Ape is a giant ape who first appears in Mumbo's Mountain on top of an orange tree of which he is very possessive, throwing oranges at anyone who comes near it. He wears a red shirt with black trousers and shoes.

Conga is the first boss the player encounters. In order to defeat him and obtain a Jiggy, Banjo and Kazooie must steal an orange by climbing the tree and giving it to Chimpy, a small monkey who is quite fond of the fruits. Chimpy will allow them access to a perch from which Blue Eggs can be fired at Conga, damaging him and eventually forcing him to surrender the glittering jigsaw piece. Another Jiggy can also be obtained from Conga by standing on each of the three blocks around the tree and tricking him into hitting the blocks with oranges, causing them to vanish and reveal a Jiggy when all three have been hit.

Conga appears again in Banjo-Tooie where he guards the entrance to the Big Top tent in Witchyworld. He will only admit Banjo and Kazooie into the tent if they turn over four Tickets, and if they've learned the Airborne Egg Aming move from Jamjars. Once all requirements are met, Conga runs off and disappears for the remainder of the game. He also acquired a carnival hat and jacket along with his other clothes. The tickets must be collected by defeating each of the four Fruities, the killer slot-machine monsters, around the tent by hitting them with Grenade Eggs, a well-aimed Bill Drill, or by ramming them with the Van transformation. 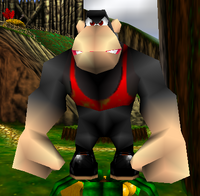 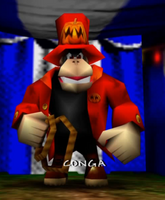 Conga as he appears in the Character Parade in Banjo-Tooie.

A white-shirted Conga in an early build of Banjo-Kazooie.