“No problem, just splosh on in and I'll fire you up to the top!”
—Dingpot, Banjo-Kazooie


Dingpot is a cauldron who is owned and often abused by Gruntilda. He is very similar to the Magic Cauldrons of Gruntilda's Lair except for the fact that he wears a permanent frown, adorned with one gold tooth, rather than the blissful grins of the other Cauldrons. At the beginning of Banjo-Kazooie, Dingpot informs Grunty of Banjo's sister, Tooty, who is far more beautiful than Grunty is. This leads Grunty to kidnap Tooty and start Banjo and Kazooie on their first adventure. Dingpot is not seen any other times throughout the game until Banjo and Kazooie reach him at the top of Gruntilda's Lair, where he has a change of heart and decides to help the two out. He then allows Banjo to jump inside him so he can transport to the roof of Gruntilda's Lair to fight Grunty (it is heavily implied that the reason he aided them is because he was sick and tired of her cruel treatment of him, including vomiting in him, getting dandruff in him when she leans in on him, presumably using him as a toilet, using him as a makeshift garbage can/incinerator for various waste [including potato peelings], a stove, and forcing him to wash her clothes, one of which she threatened to do had she beat Banjo and Kazooie, plus her murdering his saucepan girlfriend by "break[ing] [the saucepan's] handle").

In Banjo-Tooie, Dingpot resides in Cauldron Keep and is not seen in any other parts of the game. Instead of transporting Banjo and Kazooie to the final fight, he gives them a "Dingy" bonus, which simply refills their Eggs and Feathers. Kazooie, not wanting to jump in Dingpot again, claims that she just finished cleaning her wings from last time. It is unknown how Dingpot came to be at Cauldron Keep as he is not seen leaving with Grunty and her sisters. It is also unclear why Dingpot was still under Grunty's possession and not punished, especially when Cheato had his pages torn out by Grunty as revenge for his role in helping Banjo and Kazooie defeat her.

In Banjo-Kazooie: Nuts & Bolts, Gruntilda uses Dingpot as her seat in her vehicles. However, he says nothing, he only moves his eyes and eyebrows when the vehicle is repeatedly beaten. Sometimes, he even opens his mouth. It is impossible to get Dingpot as a vehicle part.

Dingpot shares the same voice as the Warp Cauldrons, although this is to be expected since they are all cauldrons. 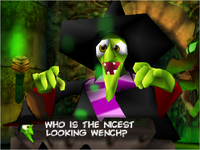 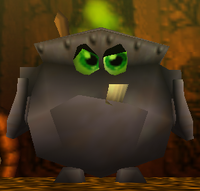 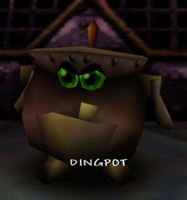 Dingpot, as a seat again, in Jiggosseum's Act 5, on the Laser Triangle

Gruntilda inside Dingpot in her fortress (Spiral Mountain Showdown vehicle)

Retrieved from "https://banjokazooie.fandom.com/wiki/Dingpot?oldid=46441"
Community content is available under CC-BY-SA unless otherwise noted.