He is born in the spring when the bear and bird break open his egg in his nest, but he tells them he must sleep for all of spring. During summer and autumn, he is very hungry and asks them to feed him caterpillars so he can grow bigger and stronger in the following season.

By the winter, Eyrie has fully grown into an adult eagle and flies away, but not before rewarding Banjo and Kazooie with a Jiggy as thanks.

Eyrie is a giant eagle. When he is first hatched out, he is just a baby. He has large, tan colored feet with sharp talons, and body and tail are covered with orange feathers, and they are yellow near his belly. Eyrie has small wings, so he probably can't fly. But that's OK because he has his nice, comfy nest. His beak is also tan colored, and he has green eyes. He also wears a diaper, which also has a blue safety pin.

When Eyrie is all grown up, he is noticeably larger, of course, and he now golden feet. He no longer wears his diaper. His feathers are dark brown now, with the exception of his head and neck. They are white, and his beak is now yellow. Eyrie's eyes are a rich shade of blue, and he also has two large white feathers on the top of his head. 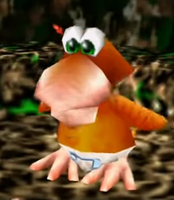 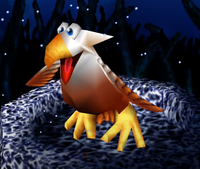 Eyrie all grown up in Winter.