The Feathery Flap is a basic jumping ability initially learned on Spiral Mountain in Banjo-Kazooie. Press

while in the air and Kazooie will flap her wings, giving the bear and bird a slight upward boost and extending the reach of their jump.

can also be held down to keep Kazooie flapping and slow their descent, but she can only flap for a few seconds if she is carrying Banjo's extra weight (alone, she can flap indefinitely). The same ability is seen in Banjo-Tooie.

The Feathery Flap can also be used in Banjo-Kazooie: Grunty's Revenge, but must be relearned from Bozzeye on Breegull Beach for 110 Musical Notes. Simply press

after jumping to flap and boost the range of the pair's jump.

The Feathery Flap as seen in Banjo-Kazooie: Grunty's Revenge.
Add a photo to this gallery 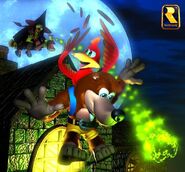 Banjo and Kazooie using the Feathery Flap to avoid Gruntilda's charm magic.
Add a photo to this gallery

Retrieved from "https://banjokazooie.fandom.com/wiki/Feathery_Flap?oldid=36963"
Community content is available under CC-BY-SA unless otherwise noted.