Flight is one of the most useful abilities in Banjo-Kazooie and Banjo-Tooie, and probably the most exciting and anticipated for a new player (especially for Kazooie when she first learns how to fly). Bottles teaches Banjo and Kazooie how to fly atop The Salty Hippo in Treasure Trove Cove. The ability to fly has many obvious advantages, such as being able to reach high-up places or soaring over obstacles on the ground.

In order to fly, simply stand on a Flight Pad and press

to take off. Once in the air, use the

may be held to make sharper turns. In order to gain altitude, just press

, although a Red Feather will be used each time this is done.

The Beak Buster can be used while flying by pressing

, either as an attack or as a quick landing, but use with caution, as the pair will take damage if this is done from too high. In addition, the Beak Bomb, an aerial missile-like attack which can be learned in Freezeezy Peak, can be used by pressing

, although this also costs a Red Feather for each use.

In Banjo-Tooie, Jamjars teaches Kazooie how to shoot eggs while in flight with

. Other than this small change, flying remains virtually identical and every bit as useful as in Banjo-Kazooie, though now it is possible to fly in first-person mode even prior to learning Airborne Egg Aiming.

Banjo and Kazooie flying in Treasure Trove Cove.
Add a photo to this gallery 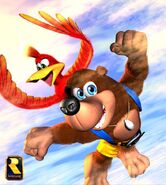 Banjo and Kazooie flying in the sky. 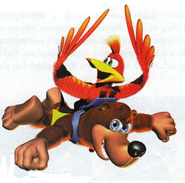 Banjo and Kazooie in flight.
Add a photo to this gallery
v •  e

Retrieved from "https://banjokazooie.fandom.com/wiki/Flight?oldid=34930"
Community content is available under CC-BY-SA unless otherwise noted.