“Hi, I'm Gloop! Grab my bubbles if you're low on air!”
—Gloop, Banjo-Kazooie

Gloop the Fish is a friendly blue fish from Clanker's Cavern in Banjo-Kazooie. He supplies Banjo and Kazooie with much-needed air in the form of bubbles while the bear and bird try to raise Clanker by swimming through a key deep underwater. He blows sequences of bubbles every few seconds followed by a short rest.

Unfortunately, Gloop cannot free Clanker despite being able to swim through the key needed to free him. 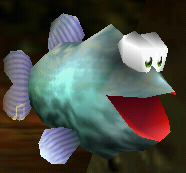 Retrieved from "https://banjokazooie.fandom.com/wiki/Gloop_the_Fish?oldid=46213"
Community content is available under CC-BY-SA unless otherwise noted.