Start a Wiki
“Oh, here you are at last! I've been waiting months to give you this!”
—Gnawty, Banjo-Kazooie

Gnawty is a beaver who resides inside the tree of Click Clock Wood.

Gnawty is a beaver who is having trouble getting into his house. He is found in all seasons of Click Clock Wood.

In the spring, he tells you that there is a rock in front of his house, preventing him from getting in; however, the water prevents Banjo from destroying the boulder (legitimately). In the summer, Banjo can break the rock blocking his house; however, due to the drought, there isn't enough water to swim up and it's far too steep to use Kazooie's Talon Trot. When autumn comes around, Banjo can finally swim into his house and collect the Jiggy. In winter, Banjo can swim in the frozen pond to get into Gnawty's house to obtain an Extra Honeycomb. However, due to the low temperature, there is only one hole in the ice to enter the water and whenever Banjo and Kazooie dive below the surface of the water and/or under the ice, it costs Banjo and Kazooie to use up air twice as fast due to the freezing temperature.

If Banjo ignores Gnawty in the summer, he can still be found trying to get into his home and is still trapped outside in the pond. In autumn, he will begin state that wishes he was inside his house (although the water will still prevent Banjo from destroying the boulder as well) since the water was filled up to the level of what it is in spring. Finally, in winter, Gnawty is trapped beneath the frozen pond and accuses Banjo for not helping him.

If Banjo forgets the Jiggy in autumn, but gets it in the winter, Gnawty will worriedly say that he really wants it if he was still outside.

He is a big beaver, with faded pink/red outer fur. His body fur is tan, he has green eyes, and buck-teeth. 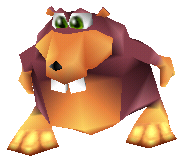 Retrieved from "https://banjokazooie.fandom.com/wiki/Gnawty?oldid=44775"
Community content is available under CC-BY-SA unless otherwise noted.