, only to be transported back in time to the land of the pharaohs, where they explore cursed pyramids and solve ancient puzzles. Gobi's Valley is the sixth world accessed from Gruntilda's Lair in Banjo-Kazooie. The level features three pyramids, a sphynx and even a giant golden Kazooie Statue. This is the first of two Levels to feature Gobi the Camel (the other being Click Clock Wood) who is a camel who ends up hating you as you use the Beak Buster on his hump and take his stuff (you can even get an empty Honeycomb Piece from him) here they learm the Turbo Trainers move from Bottles. The Turbo Trainers are the final move in the game. 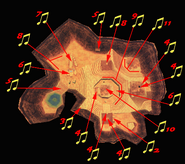 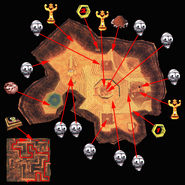 Objects and points of interest location. 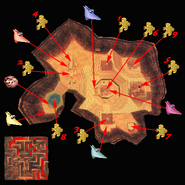 Jiggies and Jinjos locate.
Add a photo to this gallery

Gobi's In the Ancient Door

Jinxy
Add a photo to this gallery

Retrieved from "https://banjokazooie.fandom.com/wiki/Gobi%27s_Valley?oldid=28469"
Community content is available under CC-BY-SA unless otherwise noted.