“Bah... that's it! I'm leavin this island to find some peace and quiet!”
—Gobi, Banjo-Kazooie


Gobi the Camel is a character who made his first appearance in Banjo-Kazooie and returned in its sequel. He is a species of camel found first in his own world, Gobi's Valley.

In Gobi's Valley, near the matching floor mini-game, there is a flying carpet that goes to an island where Banjo and Kazooie free Gobi and are rewarded with a Jiggy. Gobi runs off to Trunker's shade, where the pair return to Beak Bust him to water the thirsty tree. Annoyed, Gobi moves into the alcove near Jinxy in front of the door leading to the Blue Mystery Egg, where the duo again flatten his humps for an Extra Honeycomb Piece. Gobi is very upset and leaves the world.

He reappears in Click Clock Wood in Summer and Autumn, where Banjo and Kazooie again take some of his water to water the huge plant near the Bigbutt. After this, Gobi is fed up with the duo and leaves for "the lava world".

Next seen in Banjo-Tooie, Gobi is found imprisoned in Witchyworld's Cave of Horrors in a cage marked "Ancient Bearded Camel". Once freed again, he moves on to Hailfire Peaks at the Fire Side's Train Station. His last store of water is once again used by Banjo and Kazooie to cool down Chuffy's boiler, allowing it to travel to the Ice Side of the world. He is seen with a beard in Banjo-Tooie; a discussion before his freedom as Banjo alone reveals that he was given the beard as an attempt to boost his popularity... but to no avail.

In Banjo-Pilot, Gobi makes a cameo appearance in the Gobi's Valley track. Gobi was confirmed for Banjo-Kazooie: Nuts & Bolts but does not physically appear in it; however, he does appear as two of L.O.G.'s pre-made vehicles: the LOG Gobi and the LOG Aqua Gobi, two vehicles that closely resemble camels.

(if the player visits him the first time as Banjo alone) 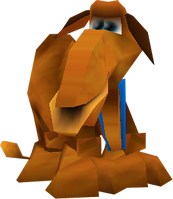 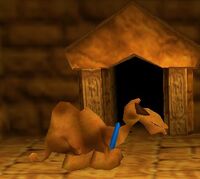 Gobi in his valley. 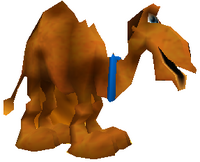 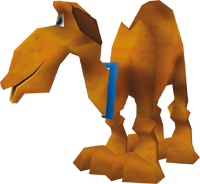 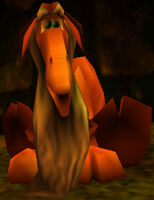 Gobi's Food Bowl, after freeing him

Gobi's sprite from Banjo-Pilot.
Add a photo to this gallery
v •  e

Retrieved from "https://banjokazooie.fandom.com/wiki/Gobi_the_Camel?oldid=46802"
Community content is available under CC-BY-SA unless otherwise noted.