The Golden Goliath is a large, golden statue of an anthropomorphized tiger found in Mayahem Temple. He remains dormant and buried in the ground with only his head visible until Mumbo Jumbo casts the Summon spell on him, rising him up and giving control of his body to the player for seventy five seconds. During this time, the Golden Goliath can wade through quicksand to collect treasures and has a kicking attack which is powerful enough to blow open large stone doors, bust boulders, and completely demolish Sput Sputs (who respawn when the Goliath is returned to his plinth). The Golden Goliath is only required to open the stone doors and get a certain Jiggy, although he can destroy objects that could otherwise only be destroyed with the Bill Drill and Grenade Eggs. He also has a rather limited jump, which isn't of much use, but is impervious to damage. Most enemies will run around in fear when the Golden Goliath moves around.

After seventy-five seconds of being active, the Golden Goliath will power down and return to his resting place. The player can also stand on the podium and press

to switch back to Mumbo immediately.

In Banjo-Kazooie: Nuts & Bolts, a statue of the Golden Goliath's head can be found in Banjoland, in the Mumbo's Mountain section of Banjoland along with Targitzan and the Kickball Pitch from Mayahem Temple. In this game, it bears more of a resemblance to a mouse than a tiger.

"The Golden Goliath was brought to life by a little Mumbo magic in Banjo-Tooie's first world, Mayahem Temple. The Goliath had an almighty kick, great for opening up blocked-off areas." 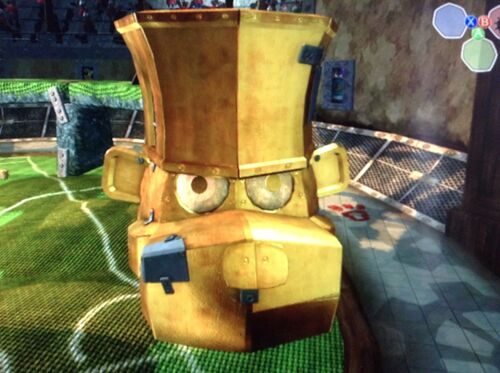 Retrieved from "https://banjokazooie.fandom.com/wiki/Golden_Goliath?oldid=44878"
Community content is available under CC-BY-SA unless otherwise noted.