Grabbed by the Ghoulies is a game made for the original Xbox by Rare Ltd. in 2003. The story involved a teenage boy named Cooper Chance rescuing his girlfriend Amber from Baron Von Ghoul and his army of paranormal ghosts and creatures, created by Dr. Krackpot. The game was a slapstick-horror themed 3D "beat 'em up" game. It was given mixed to somewhat positive reviews upon release, and was seen as a disappointment by Rare fans, but it has gained a cult following since its release. The game made nods to the Banjo-Kazooie series, with pictures of the cast, items and a cameo by Roysten.

Cooper and Amber stumble across Ghoulhaven Hall after getting lost in a storm while hiking. Amber suggests taking shelter in the mansion, while Cooper hesitates. Baron Von Ghoul sees all, and kidnaps Amber. Cooper gives chase, encountering the staff of Ghoulhaven Hall along the way, including Crivens the butler, Fiddlesworth the groundskeeper, Ma Soupswill the chef, and Mr. Ribs, her assistant.

Throughout the mansion, several miscellanous items referring to Banjo Kazooie can be located. In many rooms, portraits of the cast are found, such as Mumbo, Klungo, as well as Banjo and Kazooie themselves. In the intro, a keepcase of Banjo Tooie can be seen, as well as a sticker with Banjo and Kazooie stuck to a page of a book. A page containing a review of Banjo Tooie can also be seen for a fraction of a second. A can titled: Captain Blackeye's Barnacle Remover (referencing the infamous antagonist of Project Dream), can be found in the boathouse along with a locker reading "D. Jones" a nod to the locker found underwater in Jolly Roger's Lagoon. A blackboard within the mansion reads: "Collect Ice Key, Collect 6 eggs, Open secret level." This is a reference to the procedure of Stop 'n' Swop.

In the garden area, two dog food bowls can be found. One reads "Mingella" while the other reads "Blobbelda" This is a reference to Gruntilda's sisters, who share the same names. In the cellar, a barrel reads: "1881". This number is the same as those found in the basement of Mad Monster Mansion. In the pantry, there are cans that read "Guffo's Beans" and "Mrs. Bottles Tea". In the garden, a fertilizer sack titled: "Grunty's Grow Fast Compost". Near Fiddlesworth's cottage, a beehive can be found, which is similar in appearance to the Beehives from Banjo-Kazooie and Tooie. A bottle of shampoo in a shower reads: Tiptup's Turtle Head Toilet Cleaner, and Baron Von Ghoul's pajamas have pictures of Banjo, Kazooie and Mumbo on them.

References to Grabbed By The Ghoulies in Banjo Kazooie: Nuts & Bolts

Banjo-Kazooie: Nuts and Bolts makes several references to Grabbed By The Ghoulies, some in dialogue, and others in physical appearance. They are as follows:

A cameo by Banjo Tooie in the intro. 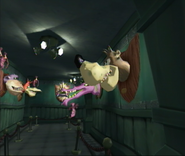 A snapshot of the "Hallway" segments, showing a bear with a striking resemblance to Banjo.

A photo of Banjo and Kazooie in a book during the intro.

A portrait showing Klungo in one of the rooms. 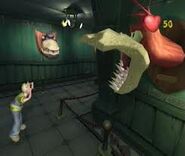 A bird (resembling a monstrous Kazooie,) frightening Cooper.
Add a photo to this gallery
Retrieved from "https://banjokazooie.fandom.com/wiki/Grabbed_By_The_Ghoulies?oldid=45429"
Community content is available under CC-BY-SA unless otherwise noted.