Start a Wiki
The Hag 1 is the drill-equipped tank used by the Winkybunion sisters throughout Banjo-Tooie. It is first used by Mingella and Blobbelda to rescue Gruntilda, and as it burrows its way through the Isle O' Hags in the beginning of the game, it causes massive destruction, scattering and mowing down the poor Jinjos in Jinjo Village.

Finally, right at the end of the game, Gruntilda pilots it in her final battle with Banjo and Kazooie. It didn't seem very easy for her to use, because she frequently seems to need help with the lasers and the cannons. Its batteries were the Bigga-Bazza! variety, and it was implied via a sticker on the side that at least some portion of the battery was made of diamonds.

Grunty turns on two lasers in opposite corners of the Hag 1 and makes it spin around. The lasers are low to the ground and are easy to jump over; moving around isn't really required. Eventually, Grunty will pop out of the hatch and ask you a question. These questions are different than the ones in the Tower of Tragedy and have a 5-second time limit. If you get the question right, she'll use a slower attack. If you get it wrong, she'll fire her spells much faster. The fast-firing spell fires quickly enough that the HONEYBACK cheat can't keep up.

You'll then switch into Breegull Blaster mode. Fire eggs at Grunty (you have to aim upwards, so either use

) until her health drops to 90 (you can't deal any more damage than that right now). Blue Eggs do 1 damage, Fire and Ice Eggs do 2 damage, and Grenade Eggs do 3 damage.

Gruntilda goes back into the hatch and drops a honeycomb. It won't disappear during the battle, so save it for later.

Grunty turns on all four lasers of the Hag 1 and makes it spin around, this time faster. Not much different than before; only jumps are needed (although you can Talon Trot in the same direction the lasers are spinning - just be warned that using the Talon Trot causes you to face the wrong way when you next enter Breegull Blaster mode). Additionally, trotting around her too fast will cause her to change direction immediately, giving you no chance to jump over the laser. Eventually, Grunty will pop out of the hatch and ask another question, with the same motivation.

Breegull Blaster mode is activated again. Take another 10 HP off Grunty (dropping her down to 80) and stop shooting to avoid wasting eggs. Save the honeycomb Grunty drops for later, when you really need them.

Grunty deactivates the lasers and calls in the mortar cannons. This time, you want to switch to the Talon Trot. Run around in a circle. The Hag 1 will spin, then stop and fire a cannon. It's easy to dodge the initial blast, but you also have to jump, or the shrapnel will hit you. The shrapnel shoots in four directions. You know when the blasting is over when the Hag 1 stops for a long time. When that happens, stop the Talon Trot and face her. She'll pop out of the hatch and ask a question. Answer it correctly so she uses her slower attack.

You then get to shoot at her some more. Get her down to 70 HP. Grunty drops another honeycomb, but don't waste it! You'll be needing them eventually...

A good strategy for this attack is to go to the very edge of the boss area and keep running basically along the wall, circling Hag 1. With this strategy, the shrapnel shoots will never touch you. When Grunty asks a question, you won't be susceptible to being blasted.

Stage 4 - Pop Goes the Bear and the Bird

Grunty will call in another mortar cannon. This time the Hag 1 spins faster, the blast is larger, and there is an eight-directional shrapnel. If you stay with the Talon Trot and keep moving and jumping when the shrapnel comes, you shouldn't get hit. However, you have to shift your movement a bit when you jump or you'll land on the shrapnel anyway. Answer Grunty's question correctly or she'll use the quick spells.

You get to shoot some more. Grunty gets down to 60 HP and drops another honeycomb. Save them for when you're low on health.

The same strategy for stage three could work for stage four, but be on your toes, because there are eight shrapnel shoots instead of four.

Grunty recalls the cannons, fires up the drill, and switches on the two front lasers. This is similar to the first stage, however this time she also opens the exhaust port to air out the engine. You have to Talon Trot if you expect to avoid damage, since she'll spin around, then try to move forward with the drill, attempting to hit you. She'll throw in a sudden change in direction every now and then to try and catch you with the lasers. You have to anticipate these so you can jump at the right moment. It's much easier if you make sure you're equally distant from both lasers on your sides. This may be easier if you move to the very edge of the battlefield for maximum spacing, but don't get too close since the battlefield wall is sloped and may limit your jumping. Note that the best place to be during this part is behind the Hag 1, not because of the lasers but because you must use its backside shortly. Once Grunty pops out of the hatch, answer her question and start blasting.

You have to be a little more careful this time. The lasers stay turned on, so you only have a limited area to move. Keep an eye on the lasers or you'll step right into them. Blast her until she's down to 50 HP.

The engine will sputter because of Grunty's reckless driving. Quickly shoot a Clockwork Kazooie Egg and make it jump into the exhaust port, which isn't letting out exhaust anymore (otherwise the Clockwork Kazooie would get pushed away). If you don't make it before the exhaust comes out again, you'll have to go through another round of dodging lasers and the drill. Hop over the cables inside the Hag 1 and avoid the enemies. (Clockwork Kazooie bombs detonate automatically on contact with enemies, and you don't want to hit them.) Head to the back and blow up either of the batteries.

Grunty hears the explosion and proceeds to the next stage.

Stage 6 - And Switch Four Lasers On

Similar to the second and previous stage, but with all four lasers active, the Hag 1 is a lot faster, and it changes direction more suddenly as well. Stay close to the back of the Hag 1, since you know there's another battery inside that you need to destroy. Grunty will eventually pop her question, so answer it correctly.

Again, you must avoid the lasers and shoot Grunty down to 40 HP. Grunty drops another honeycomb after this.

The engine breaks down, so fire another Clockwork Kazooie Egg into the exhaust port. Hop over the cables, avoid the enemies and destroy the other battery.

With both batteries destroyed, the Hag 1 shuts down. Grunty's fed up, so she sticks to the fast spells now and ditches the questions, but you have unlimited space to move as Mr. Drill is no longer here to scare you and neither are the lasers. The rest of the battle is in Breegull Blaster mode. Just strafe left or right to dodge the spells. Blast her down to 30 HP to start the next phase. Grunty drops a honeycomb. Pick it up if you are in need.

Grunty ponders whether or not there's anything left the Hag 1 can do, and indeed, there are still a couple of tricks you haven't seen. Grunty sends Uggers to hop out of the hatch and attack you.

The minions can actually be a good thing. First of all, if you keep moving, you probably won't get hit by them. Second of all, they sometimes drop honeycombs, and you bet you'll be needing them now (or soon). If they're getting on your nerves, use the Beak Bayonet (to avoid wasting ammo) and maybe scrape a honeycomb out of them. Attacking one causes another to appear, however. Avoid the spells and blast Grunty down. In between spells (you have to be really fast), grab a honeycomb or attack a minion. This is of superb importance.

When you lower her to 15 HP, stop. She drops a honeycomb and starts the next stage.

Grunty releases purple cyanide and mustard gas into the air, limiting the amount of time you have to defeat her. If you have all 10 bubbles from Roysten (which you should, otherwise you may be in trouble), you definitely shouldn't lose due to running out of oxygen. Also, Grunty puts 2 Uggers on the battle area making it harder to navigate around.

Continue blasting her with eggs. Keep strafing to avoid minions and spells. Pick up honeycombs in between spells. When you get her down to a mere 1 HP, the final stage begins (after she drops a honeycomb, of course).

The minions all disappear (presumably from breathing the gas) and the gas vanishes. Gruntilda, finally through messing around, prepares her most powerful spell ever, and as she does, she lets her last name, Winkybunion, slip out. Don't let her boasting fool you; this spell isn’t powerful enough to kill Banjo in one shot. However, it does rapid-fire, so remember to keep moving. Do not stop or you will probably die! You are probably down to a couple honeycombs, and her final spell will roast you if you stop moving. Even if you are at full health with the maximum health bar, this will make short work of you. She doesn't stop firing these things, so you can't rest. What you have to do is hit her with an egg while she's holding the spell, causing her to drop the explosive spell (Oops).

Grunty doesn't manage to find the spell in time, and as a result, the entire Hag 1, along with her body, explodes into a million pieces. Congratulations, you've beaten Gruntilda Winkybunion (again)!

Banjo and Kazooie head to the party at Bottles' house. Sadly, it's already over, as Klungo (now a good guy) has eaten everything in sight. They all argue and insult each other, until Bottles puts a stop to it. Kazooie says that she has a fun idea, and leads everyone to the top of Cauldron Keep, where Grunty's head lays. They play kickball with it, and she swears that they'll be sorry in "Banjo-Threeie."

The Hag 1 in the introduction to Banjo-Tooie.

Gruntilda inside the Hag 1.

The Hag 1 makes a big boom. 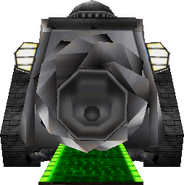 The Hag 1 Boss with lasers model.
Add a photo to this gallery
v •  e

Retrieved from "https://banjokazooie.fandom.com/wiki/Hag_1?oldid=44729"
Community content is available under CC-BY-SA unless otherwise noted.