Hailfire Peaks is an island of extreme temperature differences, with one side covered in fire and lava beneath an active volcano, and the other covered in ice and snow beneath a frozen geyser. Each of the peaks is home to one of two dragon brothers, Chilli Billi and Chilly Willy, who rule over their respective sides.

Shortcuts to other Worlds 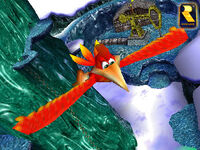 Aerial view of the Ice Side. 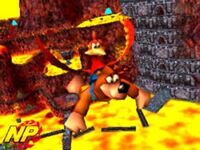 Aerial view of the Fire Side.

The Mega-Glowbo's Secret Cavern and the lock of Ice Key.

inside the volcano and icicle grotto path of the caves inside mountains.

The gates on the Fire Side.