Honey B. is a female character found at the Isle o' Hags in Banjo-Tooie. As her name implies, she is a bee and trades Extra Honeycomb Pieces for Honeycomb Containers. Though she is somewhat thin (Kazooie mistook her for a wasp due to this fact), she is very tall, towering over Banjo. She proclaims herself to be the "Mistress of the Honey"; however, she later confesses that she is merely an "Apprentice of the Honey" after the final honeycomb piece is redeemed.

In Banjo-Tooie, she offered health bar extensions in exchange for Empty Honeycomb Pieces, in her hive located in the Plateau of the Isle o' Hags.

In Banjo-Kazooie: Grunty's Revenge, Banjo and Kazooie go back in time 20 years in the past and meet Honey B for the first time in Spiral Mountain. She has the same role as in Banjo-Tooie and resides in her hive at Spiral Rise. 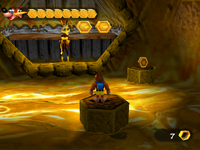 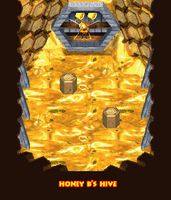 Retrieved from "https://banjokazooie.fandom.com/wiki/Honey_B.?oldid=46259"
Community content is available under CC-BY-SA unless otherwise noted.