A Honeycomb is a unit of health used in the Banjo-Kazooie series as the player's life bar. Usually, being hurt by an enemy or damaging terrain causes Banjo and/or Kazooie to lose a Honeycomb (more can be lost at once from certain enemies and fall damage). Honeycombs can be replenished by collecting some from fallen enemies (usually one at a time), Beehives, or just in random areas.

Honeycombs appear in Banjo-Kazooie: Nuts & Bolts, but not as collectible health items; they're instead used as fetch items during L.O.G.'s challenge in Spiral Mountain.

Honeycombs also have a different purpose in Banjo-Pilot. Flying through a floating honeycomb grants the player a usable item, selected randomly from a pool of items that varies based on the player's position within the race ranking. 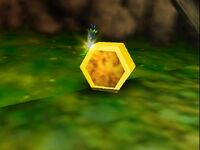 A honeycomb in Mumbo's Mountain.

Three honeycombs in The Six of the Best.
Add a photo to this gallery 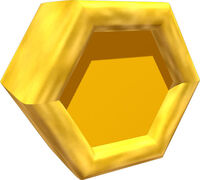 A green Jinjo with a lot of honeycombs. 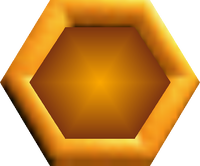 The Banjo-Tooie version of Honeycomb model.
Add a photo to this gallery

Retrieved from "https://banjokazooie.fandom.com/wiki/Honeycomb?oldid=46179"
Community content is available under CC-BY-SA unless otherwise noted.