“Hey...It's me, Mr. Jiggy! Now go and find a picture with a piece missing.”
—A Jiggy, Banjo-Kazooie

Jiggies are collectible items found in all of the Banjo-Kazooie games and can be considered the series' symbol. These golden jigsaw pieces contain a strong magic capable of breaking open the entrances to the games' worlds and are essential in progressing through each game. Jiggies are obtained through completing various missions, helping characters, playing mini-games, fighting bosses, or sometimes (especially near the beginning of the games) found lying on the ground in certain areas. Depending on the game, the number and manner in which the Jiggies open worlds is different.

Every level has a matching portrait hidden somewhere in Gruntilda's Lair. Jiggies fill in missing pieces of the level's portrait like a Jigsaw Puzzle, and an increasing number is required for each consecutive world. Jiggies here are actually "spent" to open worlds, unlike subsequent games in which only the total amount of Jiggies collected is considered. The very first Jiggy is found right next to the entrance of Gruntilda's Lair, allowing the duo to complete the Mumbo's Mountain picture and systematically raid the whole lair of its Jiggies, Notes and Moves. This is similar to Super Mario 64 (the game that laid base for Banjo-Kazooie and many other 3D platformers) in which one door wasn't sealed, allowing Mario to collect his first Stars to open other worlds and collect more.

Jiggywiggy again opens the worlds, just like in Banjo-Tooie, but solving a puzzle is no longer required.

Once a certain amount of Jiggies are collected, Banjo and Kazooie can enter Jiggywiggy's Temple. The duo must solve a moving picture game for Jiggywiggy to open the next world. It is very similar to Bottles' Moving Picture Game in Banjo-Kazooie. An increasing number is needed for each consecutive world.

Jiggies are taken, from Jig-O-Vends, to the Jiggy Bank in the Central Plaza of Showdown Town, to open the world act doors, and, similar to the previous games, an increasing number is needed on every door.

Although not a collectible in this racing game, Banjo and Kazooie's All Star involves Kazooie waving her magic wrench and then sending waves of Jiggies to crush other opponents. 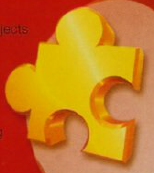 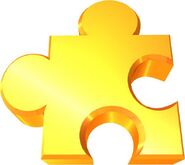 A Jiggy art from Banjo-Pilot 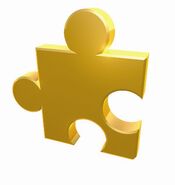 Another Banjo-Kazooie: Nuts & Bolts Jiggy art.
Add a photo to this gallery

Retrieved from "https://banjokazooie.fandom.com/wiki/Jiggy?oldid=38283"
Community content is available under CC-BY-SA unless otherwise noted.