Banjo-Kazooie (XBLA)
Banjo-Tooie (XBLA)
Banjo-Kazooie: Grunty's Revenge
Banjo-Pilot
Banjo-Kazooie: Nuts & Bolts
Super Smash Bros. Ultimate
Jinjos are small creatures found in every game in the Banjo-Kazooie series. These bipedal teddy bear/pterosaur-like critters with beaks come in a variety of colors and are more intelligent than their appearance might let on. It is never explained in detail, but Jinjos seem to have some magical powers, possessing the ability to fly among other things. They also seem to be able to breathe underwater and live in harsh environments, due to the fact that many Jinjos are found underwater or in other dangerous surroundings.

In Banjo-Tooie, it was revealed that Jinjos live in a small village and are ruled by King Jingaling, a very large, yellow Jinjo much larger in size of a normal Jinjo. It was also revealed that there are evil versions of Jinjos, known as Minjos, who disguise themselves as Jinjos and attack Banjo when he tries to collect them.

Five Jinjos - a Blue, a Green, an Orange, a Purple, and a Yellow Jinjo have been hidden throughout each world by Gruntilda (presumably as punishment for them revolting against her or otherwise proving to be a nuisance to her, as she mentioned to them when aiding Banjo and Kazooie in the final battle against her that she already punished them for being "bad", and that she'll be mad if they aid the duo). Once all five Jinjos are rescued, the player will be rewarded with one of the world's ten Jiggies. Like Musical Notes, Jinjos' positions are reset once Banjo leaves the world, meaning that he must go through and collect them all again if he misses any the first time. Jinjos reappear in a world even after all five have been collected and gives Banjo and Kazooie an Extra Life rather than another Jiggy if they are collected again. In the XBLA version, they stay collected, like the notes.

The Final Battle with Gruntilda

Jinjos aid Banjo and Kazooie in the final battle with Gruntilda as thanks for rescuing them. During the fourth stage of the fight, Grunty casts a magical shield spell over herself which makes her invincible to all attacks from the player. Several rams while flying later, 4 stone Jinjo statues rise from the ground in each of the tower's 4 corners. By firing 3 eggs into a small hole at the base of the statue, the Jinjos can be awakened, at which point they will fly through the air and collide with the helpless witch. After the consecutive attacks from all 4 Jinjos, Grunty's evil broom shatters, stranding her on the ground, but unfortunately her shield was still intact.

During the fifth and final phase, a single, very large Jinjo statue rises from the center of the tower - the mighty and fearsome Jinjonator. 6 eggs (for each hole) must be fired into four holes at the base of the statue while avoiding the witch's rain of fireballs and homing spells. Once awoken, the huge Silver Jinjo's eyes will glow red and it will rise into the air, circling Banjo a few times to make Gruntilda dizzy before ramming Gruntilda at full speed. Only after several rams at Gruntilda, she will be Jinjonatored, crashing with a boulder somewhere in Spiral Mountain.

One yellow Jinjo also appears at Treasure Trove Cove in the ending.

In Banjo-Kazooie: Grunty's Revenge, the Jinjos have been scared away by Gruntilda, and they have left the Jinjo Oracle by herself. The Jinjo Oracle is a large stone statue that resembles a Jinjo. She needs the Jinjos to give her gossip because she can't get around. Banjo and Kazooie must find five Jinjos in each of the different worlds. After a Jinjo is collected the Jinjo Oracle will give a hint about finding a Jinjo or how to obtain a Jiggy in that specific world. When all five Jinjos are collected the Oracle will give Banjo and Kazooie a Jiggy and tell them information about the next world.

This is the only time in which Grey Jinjos need to be rescued.

The Jinjos of Jinjo Village were scared away when the Hag 1 drilling machine plowed through their village, killing the grey jinjos and slightly damaging the red family's house. King Jingaling begs the pair to return the Jinjos to their homes in time for the upcoming kickball tournament with the moles, but finding them isn't quite as easy as in Banjo-Kazooie; rather than five Jinjos in every world, Jinjos of nine differently colored families are scattered throughout all of the game's worlds including Spiral Mountain and the Isle o' Hags. Only once all of a certain color's family members are returned will Banjo and Kazooie be rewarded with the family's Jiggy heirloom. Furthermore, where certain colors appear is totally random and changes with every save file, meaning that where one Jinjo of a certain color was found on one file, any other color could be in its place on another. This also means that you have a chance of finding the Black Jinjo family before even unlocking the 3rd world, but the chances of this happening are extremely rare.

Once a Jinjo has been rescued, rather than resetting once the player leaves the area, it returns to its family house in the Jinjo Village. If any Jinjos are still missing, a slow, sad variation of Jinjo Village's theme will play inside the house, whereas completed families have a happier, more upbeat tune.

An easy way to distinguish Jinjos from Minjos is to remember which Jinjo families were completed. That way players can know which are impostors. Another way is hit a Jinjo from distance. If the egg hits it, it will be a Minjo.

Once Kazooie learns the Hatch ability, she can use it to hatch the yellow egg inside Heggy's Egg Shed. Once it has been hatched, Heggy will announce that a Jinjo is now an available character for the FPS-style Breegull Blaster shootout matches in Multiplayer Mode. The Jinjo is the smallest and fastest character, but also the most vulnerable, having only four health - a single hit from an explosive egg such as Grenade or Proximity Eggs that instantly defeats Banjo and Kazooie.

A Purple Jinjo is a playable character in Banjo-Pilot. It only has one point of top speed, but four points of acceleration and five points of handling, making him best for courses where a lot of weaving is required, but ill suited to courses with long straight ways. The player also races against seven Jinjos in the unlockable Jinjo Grand Prix.

Jinjos reappear in Banjo-Kazooie: Nuts & Bolts, and have a similar task of collection as in the previous games. Instead of Banjo simply locating Jinjos and collecting them, he must find them and complete a challenge, which varies from going over a set speed to making them roll a certain distance. Completing a Jinjo's challenge earns him a Jinjo Token, which can be used in Showdown Town for King Jingaling's Bingo Palace. Also in Showdown Town, there are six Jinjos locked up in cages around town. Banjo must free them with a Wrench Switch and take them to their homes. When a Jinjo is freed, a Minjo must be found and carried to an open cage to replace a Jinjo that has been freed. 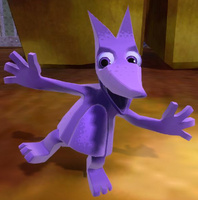 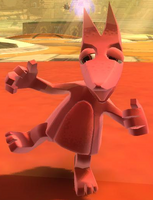 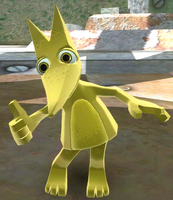 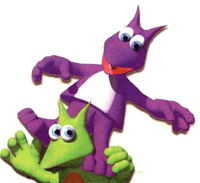 A purple and green Jinjo.

A green Jinjo with lots of Honeycombs.

Banjo and Kazooie rescuing a purple Jinjo on the box art of Banjo-Kazooie. 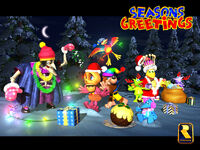 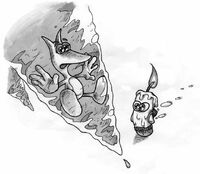 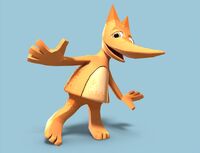 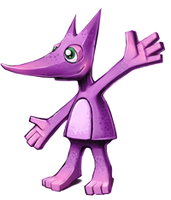 Spirit with all five Jinjos in Super Smash Bros. Ultimate