Banjo-Kazooie (XBLA)
Mad Monster Mansion is the seventh world Banjo and Kazooie visit in Banjo-Kazooie. The entrance to this world is located in the Graveyard section of Gruntilda's Lair; this area is past the "Lava Room" on the sixth floor of Gruntilda's Lair. Its picture is located on the seventh floor, specifically the third room you enter through underwater passages. The picture requires 10 Jiggies to complete. 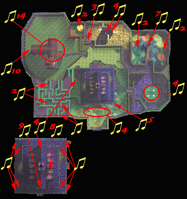 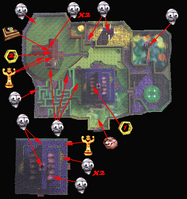 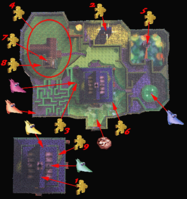 Oddly, the Mumbo Tokens marked with (*) are treated by the game as the same Mumbo Token. So collecting one will cause the other to disappear. This essentially means there are a total of 116 Mumbo Tokens in the game, though only 115 are obtainable. This forum remarks on this. However, as stated in this video, it is possible to collect both tokens. As long as you have viewed both Mumbo Tokens (i.e. breaking the barrel cover in the cellar and seeing the token inside of Loggo), both can be collected without the other disappearing.

Though it does not physically appear, an incomplete replica of the mansion appears in the third world, Banjoland, along with its own graveyard. It's nature of incompleteness is also referenced by Bottles, as in one of the missions, you were supposed to complete the mansion exhibit by lifting the pieces with the wrench and placing them on the square shaped white patch. However, this was ultimately scrapped and an air race took its place instead. He even states that the delivery van that had mailed the parts had accidentally emptied them into Loggo and they went straight to the Cut For Deadlines Room.

"Spine-tingling area of Banjo-Kazooie where our heroes met Loggo, a dozing ghost called Napper and an organ-playing spectral hand named Motzand. Was it Grunty's holiday home? Who knows?"

Banjo sneaks up on Napper in the Dining Room of the Mansion. 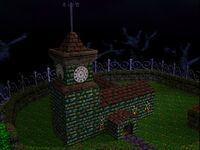 Full view of the church. 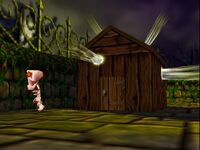