Master Jiggywiggy is the leader of a sacred sect dedicated to the protection and worship of the great Crystal Jiggy which resides in Jiggywiggy's Temple. In Banjo-Kazooie: Grunty's Revenge, Jiggywiggy reveals that Gruntilda has cursed the Jiggy priests. This curse prevents him from touching the Jiggies and forces him to rely on Banjo and Kazooie to collect the Jiggies instead. When Banjo and Kazooie have a certain number of Jiggies, Jiggywiggy allows them to activate the Crystal Jiggy to open the next world. Jiggywiggy's Disciple does not appear in this game, suggesting that he began to follow Jiggywiggy at a later period of time.

In Banjo-Tooie, whenever Banjo and Kazooie get enough Jiggies, Jiggywiggy asks them to finish a puzzle containing the image of the next world within a set amount of time. When this is accomplished, he uses the power of the Crystal Jiggy to unlock the doorway to that world. Access to Jiggywiggy's Temple and an audience with "The Great Jiggywiggy" is granted by the Disciple of Jiggywiggy - the only other member of the sect shown in the game - who stands outside the temple and allows Banjo and Kazooie to enter once they have enough Jiggies to complete the next puzzle.

Although Jiggywiggy himself does not appear in Banjo-Kazooie: Nuts & Bolts, Jolly Dodger does sell a Jiggy named "Mr. Jiggywiggy." 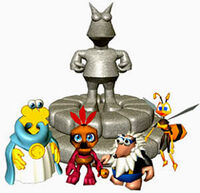 Jiggywiggy's head icon in Banjo-Kazooie: Grunty's Revenge.
Add a photo to this gallery

Retrieved from "https://banjokazooie.fandom.com/wiki/Master_Jiggywiggy?oldid=46850"
Community content is available under CC-BY-SA unless otherwise noted.