Start a Wiki
[[Category:Enemies that have 6 (Breegull Beach & Spiller's Harbour)

12 (Winkybunion Tower) hit-points]]“The time has come to end this game, the future cannot be the same. To your destruction you both race, to bear and bird I'll leave no trace! My victory will be most splendid, when I rule all, and your life's ended!”
—Mecha-Grunty, Banjo-Kazooie: Grunty's Revenge

Mecha-Grunty is a large robot that serves as Gruntilda's body and the primary antagonist in Banjo-Kazooie: Grunty's Revenge, which is a story set two months after Banjo-Kazooie and 22 months before Banjo-Tooie.

Essentially, Mecha-Grunty is a robotic version of Gruntilda which is housing her soul while her body remains trapped in her grave after the events of Banjo-Kazooie. Grunty is predictably defeated and the Mecha-grunty robot is destroyed at the end of the game, and her soul returns to her body, while she waits for her two sisters, Mingella and Blobbelda, to remove the boulder trapping her.

Mecha-Grunty is an intimidating robot built in the likeness of Grunty herself, complete with claws, a large drill acting her hat, and a pair of glowing green eyes. Its body is virtually a titanic drill covered in sheets of sturdy scrap metal and various mechanisms. Originally inanimate, Mecha-Grunty came to life when Grunty entered it and, being made on such short notice by Klungo, also has a few bugs that remain such as the weak force field. The whole time Grunty is in control of Mecha-Grunty, she refrains from using her magic, instead depending on the weapon systems installed in the robot.

Mecha-Grunty is also almost entirely based around the design of the Hag 1, which is largely implied to be made from Mecha-Grunty's wreckage, seeing as how Mecha-Grunty's body is a drill and there is a tag-plate on its waist that reads "HAG 1".

Just two months after being crushed under a rock in the ending of Banjo-Kazooie, Grunty's spirit was able to escape, and she is able to live once more by using a mechanical version of herself as a body called, of course, Mecha-Grunty. Klungo builds the robot seconds into the beginning of the game, allowing Grunty's ghost to swiftly free herself from the rock and wreak havoc soon after getting into her new robotic body. Mecha-Grunty proceeds to kidnap Kazooie and travel back in time to enact her latest plan: to prevent Banjo and Kazooie from ever meeting and erase her defeat at their hands from history. However, Mumbo uses his own magic to send Banjo back in time after her, and he successfully rescues Kazooie,

The duo fight with Mecha-Grunty many times through the game, each battle being slightly different than the last. Mecha-Grunty is also the final boss in the game and, after suffering a climactic defeat, Grunty returns to the hole her original body lays in, and tells Klungo to fetch her sisters, thus setting up the events of Banjo-Tooie. 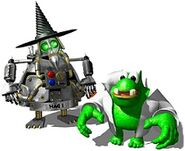 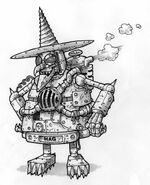 One of Mecha-Grunty's transformations (concept art).

Another one of Mecha-Grunty's transformations (concept art).
Add a photo to this gallery

Retrieved from "https://banjokazooie.fandom.com/wiki/Mecha-Grunty?oldid=43597"
Community content is available under CC-BY-SA unless otherwise noted.