Mingy Jongo is the boss of Cloud Cuckooland and a robot bounty hunter who resembles Mumbo Jumbo, hired by Gruntilda to destroy Banjo and Kazooie. In Cloud Cuckooland, there are two Mumbo Skulls; one is blue and one is red. Mingy Jongo resides in the skull that contains a Jinjo, whereas Mumbo Jumbo is located in the skull that contains a Minjo. The boss fight automatically starts as soon as Banjo approaches what appears to be a sleeping Mumbo Jumbo. As Mumbo wakes up, he says he has a surprise for the bear and bird, though Banjo doesn't seem to notice the difference in Mumbo's speech (the fake Mumbo introduces himself by saying "Hello Banjo", which is odd as the real Mumbo never refers to Banjo and Kazooie by name but always calls them "bear" and "bird").

Banjo walks up close to the fake Mumbo Jumbo only to be blasted away (which does actually take away one Honeycomb of life) and the exit is locked. As Banjo and Kazooie attack him, most of his Mumbo skin comes off to reveal a shiny silver robot with evil, red eyes. He attacks with a long-range bolt spell, which can home in on Banjo if it gets close enough. After four hits, he will begin to immediately teleport away from Banjo during his attacks, stopping after every fourth attack for a couple of seconds, allowing the bear and bird an opportunity to strike at him. After he has been defeated, he will explode and a Jiggy will appear on his chair.

If Banjo and Kazooie win the battle:

If Banjo and Kazooie lose the battle, and then return: 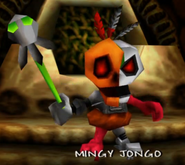 Retrieved from "https://banjokazooie.fandom.com/wiki/Mingy_Jongo?oldid=43126"
Community content is available under CC-BY-SA unless otherwise noted.