Minjos are the arch-enemies of the Jinjos, and, whether by coincidence or some kind of spell, look exactly like them. First appearing in Witchyworld, Minjos will imitate Jinjos from a distance, waving their arms and calling for help, but will spring into action when Banjo and/or Kazooie approach, growling and chasing after them while giving off yellow sparks. Because of their small size and high speed, they can be hard to avoid and even harder to attack, but a well-aimed Rat-a-tat Rap will dispatch them with a single hit, with rolling being completely ineffective. The player can also distinguish Minjos from Jinjos simply by firing eggs at them from a distance; if the eggs hit and damage the creature, then it is a Minjo. They can also be easily identified if they are a color that the player has already collected all the Jinjos for. It is also a theory that Minjos have a portion of orange coloring on their beaks.

Minjos also appear in Banjo-Kazooie: Nuts and Bolts. Once a Jinjo is released from a prison, a Minjo must be found, carried and put into the empty cell, Banjo earns notes from Pikelet for doing so. Unlike in Banjo-Tooie, these Minjos do not look exactly like Jinjos. They wear tattered prison clothing and handcuffs, sporting a devious smile and red eyes. They are also all light purple. Minjos are easily discernible by the cackling noise which they make when Banjo is nearby, and are usually located nearby vacated prison cells.

Sometimes, Minjos will just keep running around you in circles without curving enough to touch you. This video explains the glitch better: Click here 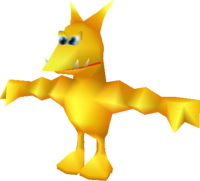 A removed model of a muscular Minjo.

A purple Minjo in Banjo-Tooie.

A White Minjo chasing Banjo in Witchyworld.
Add a photo to this gallery
v •  e

Retrieved from "https://banjokazooie.fandom.com/wiki/Minjo?oldid=46403"
Community content is available under CC-BY-SA unless otherwise noted.