“This fair is so much fun! I'm not going back to Mother, and there's nothing you can do to make me!”
—Moggy, Banjo Tooie

Moggy is one of Boggy and Mrs. Boggy's children. He appears with his siblings, Soggy and Groggy, in Banjo-Kazooie and Banjo-Tooie.

When Banjo and Kazooie first venture into Boggy's Igloo, they are greeted by a trio of depressed polar bear cubs who are sad because their father didn't get them any Christmas presents. After searching Freezeezy Peak for the three presents, Banjo and Kazooie return the gifts to the children and receive a Jiggy as a reward. For the remainder of the game, the kids can be seen joyfully bouncing around the igloo while their father sleeps in his chair.

In Banjo-Kazooie, Moggy wears blue pajama pants. Also, he is the only polar bear cub who actually has a speaking role in the game. Along with the rest of the game's cast, Moggy returns in the Xbox Live Arcade version of Banjo-Kazooie.

Two years later, Moggy, Soggy, and Groggy are visiting Witchyworld with their mother but refuse to leave the theme park. When Mrs. Boggy asks Banjo and Kazooie to round up the kids for her, the duo have a hard time getting the kids to leave. They have to hit Moggy to send him home, but neither Boggy nor his wife seem to care. However, they realize that he needs to be taught some discipline. For the rest of Banjo and Kazooie's second quest, Moggy spends his time jumping on his parents' bed in Hailfire Peaks (much to the delight of his sister, Soggy).

In Banjo-Tooie, Moggy wears blue jeans, a red cap, and a red t-shirt that bears the depiction of an unspecified planetary body that appears to be Saturn. Moggy returns in Banjo-Tooie's Xbox Live Arcade port.

Moggy, Soggy, and Groggy were scheduled to appear in Banjo-Kazooie: Nuts & Bolts, but were supposed to be cut from the game due to time constraints. The Jiggy Challenge featuring the cubs was titled "Don't Bring Your Kids to Work Day" in reference to them.[1]  However, eleven years after the game's release in 2019, Moggy as well as his sister Soggy were discovered to be in the game, not just with completed models, but complete with their own AI (namely, that reused from the Minjos). He can be found in Banjoland Act 6, in the mission Home Improvements:Igloo Edition atop of the empty display case, far away from where the actual challenge takes place.[2] His brother Groggy is not yet confirmed to be in the game. 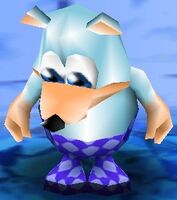 Moggy as he first appeared in Banjo-Kazooie.

A promotional wallpaper released for Banjo-Kazooie: Nuts & Bolts, showing Moggy's head near the bottom left corner.
Add a photo to this gallery

Retrieved from "https://banjokazooie.fandom.com/wiki/Moggy?oldid=46615"
Community content is available under CC-BY-SA unless otherwise noted.