“Motzand plays his organ with ease, but can you follow him on the keys?”
—Motzand, Banjo-Kazooie

The ghost challenges the duo to repeat the tunes he plays on the organ. Motzand plays two tunes: a short one consisting of only a few notes, and a longer one that is more complicated. If Banjo and Kazooie correctly copy the tunes by hitting the organ keys with the Beak Buster move, Motzand congratulates their musical ability and offers them a Jiggy as a reward. The melancholy organ music playing in the church changes to a happier tune, and Motzand floats upward and disappears. The Jiggy can be found on the tallest pipe on the top of the organ.

If Banjo and Kazooie hit a wrong key, they will lose a honeycomb so it is best to look carefully what Motzand is doing rather than hitting random notes. 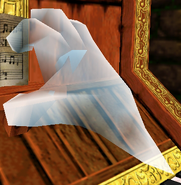 The Motzand model.
Add a photo to this gallery

Retrieved from "https://banjokazooie.fandom.com/wiki/Motzand?oldid=44734"
Community content is available under CC-BY-SA unless otherwise noted.