Mount Fire Eyes was a lava-themed world that was planned to be included in Banjo-Kazooie, but was ultimately cut during development due to time constraints. The concept was eventually re-purposed into the lava side of Hailfire Peaks in Banjo-Tooie, with numerous differences, although a number of aspects of the original concept were retained, such as a dragon boss, a coliseum, and making Gobi spit up water to use as coolant.

The world is referenced in Banjo-Kazooie, despite not being present. After stealing Gobi's water for a second time in Click Clock Wood, he will state that he is going to leave for the "Lava World". Although in Banjo-Tooie it's revealed that he was heading for Hailfire Peaks, his intention in the first game was to head for the now-absent Mount Fire Eyes.

The name "Mount Fire Eyes" has been circulating online since around the time of the N64 games' release, but it's unclear if this name was ever actually used by the development team. Director Gregg Mayles expressed amusement at the inaccuracies in an earlier iteration of this very Wiki article[1], and he couldn't recall there being any level of that name when asked[2], so it seems likely to just be a popular fan name for the level. Leftover developer text in Banjo-Tooie indicates that "FIREICE" was a placeholder name for Hailfire Peaks[3], so "Fire Eyes" could simply have emerged from someone mishearing this work-in-progress name.

Concept design showing how Gobi would be used to cool lava in one of the volcanoes, allowing a lava swim challenge to be played. 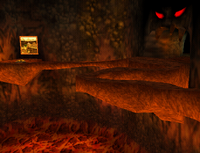 The lava chamber of Gruntilda's Lair is speculated to have been the intended entrance to Mount Fire Eyes.
v •  e