Mr. Patch is a recurring boss character who debuted in Banjo-Tooie as the boss of Witchyworld. Later on in the series, Mr. Patch appeared as a boss in Banjo-Kazooie: Nuts & Bolts, being featured in Nutty Acres and, to an extent, Banjoland. In both of the games his weakness lies in his patches.

Mr. Patch is a large inflatable dinosaur, specifically a T-Rex. He is crafted of shiny yellow and green fabric. His body is ridden with holes that have been covered up and reinforced by several colorful patches (his blatant weakness). He has bright red eyes and large ridges running across his back and a mouth full of white, blunt teeth. As evidenced by his behavior in Banjo-Tooie, he generally doesn't accept humor.

In Banjo-Kazooie: Nuts & Bolts, Mr. Patch's design was updated to give him a slightly more menacing appearance and to match the more angular art style of the game. In addition to the slight changes made to his body structure, minor details were added, such as yellow eyelids, claws on his hands and feet, and stitches running across parts of his body. The placement of many of his patches have changed, as has the location of his plug, which has been moved from in between his legs to the center of his abdominal area.

Mr. Patch is found inside of the Big Top tent in Witchyworld, which can only be accessed by collecting enough admission tickets and giving them to the ticket master, Conga. After entering, the duo initially confuse him for a rather uncomfortable seat, but he then comes alive. He is reluctant to fight but Kazooie stubbornly instigates him and insults his size, calling him smaller than "that Klungo freak at the start of the game". Mr. Patch calls her bluff however and inflates himself to epic proportions and challenges the two to a fight. If the player undergoes a rematch, he reiterates that he is not violent and would prefer not fighting them again, only for Kazooie to taunt him by claiming that he is full of hot air. Mr. Patch concedes her point about him being full of hot air, but nonetheless desides that she needs to be taught another lesson.

To defeat him, they must pop all twelve of his patches by shooting them with Grenade Eggs. After they land the first hit, they must immediately take to the air and continue the battle using Airborne Egg Aiming, as Mr. Patch summons an impervious red boxing glove which patrols the ground. Mr. Patch himself will also attack by shooting exploding beach balls from his mouth (which become near impossible to dodge when on the ground). After each hit, he gets smaller and faster, thus making him much harder to hit. The player can also burst his patches using the Beak Bomb attack. Red Feathers and Grenade Eggs can be found besides the Flight Pads on the ground, allowing the duo to replenish their supply whenever necessary. However the Beak Bomb will not work.

After all twelve patches have been disposed of Mr. Patch will deflate completely and fly out of sight, leaving Banjo and Kazooie with a Jiggy.

Mr. Patch is first encountered in Nutty Acres, act 5, in the mission "Old Dog, New Tricks", apparently being re-inflated by Grunty to cause trouble. Humba comments that Nutty Acres has been peaceful recently, but she suddenly has a premonition and "senses an approaching shadow". Sure enough, Mr. Patch appears on the horizon, and his shadow is keeping sunlight from reaching the coconuts plants below, meaning that the duo must act fast and defeat him before the plants wither too much and die. He is chained to the ground and is unable to actually attack, although halfway through the mission a swarm of Gruntbots in bi-planes appear to attack and distract the player. Like the previous game, Banjo and Kazooie must shoot all of the patches scattered around his body to rid the island of his presence. Also adding to the hysteria of the battle, Mr. Patch slightly shrinks in size each time a patch is destroyed.

Upon being defeated, a short cutscene is triggered where Mr. Patch deflates completely and flies off just like he did in Banjo-Tooie.

Mr. Patch appears once again as a boss in act 6 of Banjoland. Except this time, his skin has been given a strong, metal hide and he no longer has any patches. He is known simply as Metal Mr. Patch, and normal attacks can't pierce through his new metal body. Instead, Banjo and Kazooie must find another way to damage him (in this case, the Cactus of Strength).

In addition, photos of Mr. Patch alongside other noteworthy characters from the series are hung on display all around the walls of Banjoland.

If Banjo and Kazooie lose, and then come back: 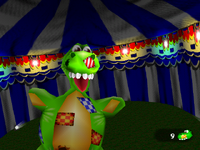 Facing off against Mr. Patch in the Big Top.

Mr. Patch in the enhanced version.
Add a photo to this gallery

Retrieved from "https://banjokazooie.fandom.com/wiki/Mr._Patch?oldid=46552"
Community content is available under CC-BY-SA unless otherwise noted.