Mumbo's Mountain is the first of nine worlds in Banjo-Kazooie. The entrance to this level is located just to the right of the entrance to Gruntilda's Lair. The puzzle is conveniently located right next to the world's entrance beyond a small fenced area and only requires one Jiggy to complete. This is the first world to introduce Mumbo Jumbo.

Hold the Z button and press the right C button to bring Kazooie out and allow her to carry Banjo, moving the analog stick to walk and the A button to jump. While in Talon Trot, Banjo and Kazooie can not only get around faster, but also move up hills that would initially cause Banjo to slide down.

Press the A button to jump, and then the Z button to do a ground pound with Kazooie.

Points of interest and objects locations.

Jiggies and Jinjo locations.
Add a photo to this gallery

The Stonehenge ruins and the particular slope where it rests are recreated in Nuts & Bolts' third world, Banjoland as its own segment. It is larger here and sits amongst the Kickball Pitch, Golden Goliath and Targitzan on the top of the hill.

"Stonehenge. Brought here from Mumbo's Mountain, Banjo-Kazooie's first ever challenge level. L.O.G. has needed to enlarge it slightly and apply new textures to make it look a little less last-last-gen." 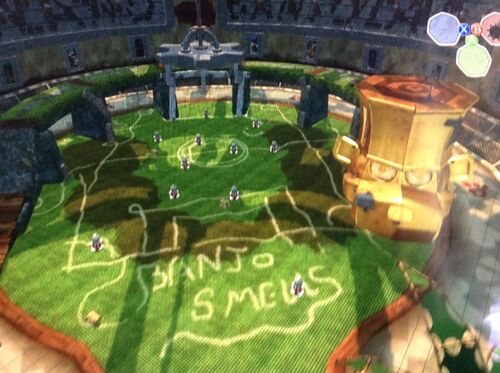 Retrieved from "https://banjokazooie.fandom.com/wiki/Mumbo%27s_Mountain?oldid=44977"
Community content is available under CC-BY-SA unless otherwise noted.