Mumbo's Skull is Mumbo Jumbo's hut. In Banjo-Kazooie, it only consists of one room, with a pad that Mumbo transforms you with. However, in Banjo-Tooie, his hut was remodeled with two floors, with Mumbo at the top. The new skull sometimes changes appearance to match the world's theme. For example, since Glitter Gulch Mine is underground, the skull appears to be made of dirt. Since the skull in Witchyworld is in the Inferno, it is red and has devil horns. In Hailfire Peaks, since the skull is on the fire side, it has a volcanic appearance. In Grunty Industries, the skull is made of grey metal. And in Cloud Cuckooland, there are two skulls - one red and one blue; depending on which skull is entered first, either skull may contain either a Jinjo and the world's boss, Mingy Jongo, or a Minjo and Mumbo himself.

In addition to this, some of the Skulls in Banjo-Tooie have quirks to them. Including the aforementioned double-skulls in Cloud Cuckooland (One hosting the boss fight to Mingy Jongo). In Jolly Roger's Lagoon there is a cracked wall which will lead you to Turtle View Cave once the wall is blown up by a Grenade Egg , A Clockwork-Kazooie Egg or 'zapped' with Mumbo's Zap Stick. In a similar fashion to that of Mumbo's Skull in Jolly Roger's Lagoon, there's also a destroyable wall in the Mumbo's Hut in Hailfire Peaks, however this is less noticable as the destruction of this wall is an unnecessary for 100% completion of this game, whereas the one in Jolly Roger's Lagoon is required. Instead of the cave leading the character to Turtle View Bay (like in Jolly Roger's Lagoon), the Skull in Hailfire Peaks leads to Wumba's Wigwam on the Icy Side of Hailfire Peaks. If Mumbo enters this cave, a small cutscene is played with Humba Wumba orders Mumbo to leave.

In Banjo-Kazooie: Grunty's Revenge, it is known as Mumbo's Pad.

In Banjo-Kazooie: Nuts & Bolts, Mumbo no longer lives in a skull. His skull makes a small appearance, as he put a large wooden version (it's flat) of it in front of his mechanic shop in Showdown Town's town square. His skull also makes an appearance as one of the many objects in Banjoland. 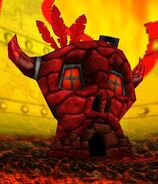 Retrieved from "https://banjokazooie.fandom.com/wiki/Mumbo%27s_Skull?oldid=44885"
Community content is available under CC-BY-SA unless otherwise noted.