Musical Notes are items which have appeared in every Banjo-Kazooie game to date. Although their appearance has not changed much, their exact function varies greatly from game to game.

Musical Notes made their debut in Banjo-Kazooie, where they are used to open various Note Doors throughout Gruntilda's Lair. Each world contains 100 Notes and every Note that Banjo and Kazooie collect adds to their total Note Score for that world. However, the Notes themselves cannot be taken out of the world due to Grunty's magic, so they will be reset if Banjo and Kazooie die or leave the world. This means that if any Notes are missed, they will have to be collected all over again, similar to Jinjos. In the Xbox Live Arcade version of Banjo-Kazooie, Musical Notes taken from worlds will not reset, allowing for an easier time in gathering any missed Notes. (Saving the collection state of all 100 Notes in each world was apparently too much for N64 hardware.) Note Doors will open if the total note scores from all the combined worlds is at least equal to or greater than the number shown on the door. There are a total of 900 Notes in the game and you will get an achievement for collecting all 900 in the XBLA version.

In Banjo-Tooie, Notes are used as a requirement to learn moves taught by Jamjars, as well as finding the corresponding Silo. The system of collecting Notes has changed - Notes are found in groups of five called Note Nests, as well as Treble Clefs that are worth 20 Notes. Because this only leaves 17 things per world to collect for Notes (100 Notes per world - 16 Nests and 1 Treble Clef), the game is able to save their collection state (that is, they do not need to be re-collected). There are also a total of 900 Notes in the game.

Just like in Banjo-Tooie, Notes are used to learn new moves in Banjo-Kazooie: Grunty's Revenge. There are again 100 Notes per world, which can be found both individually or (rarely) in Nests of 5. Notes are collected permanently. There are a total of 600 Notes in the game.

Four Notes are placed around every track in Banjo-Pilot, always in the same place. They are used to multiply the amount of Cheato Pages you earn after the race. The more you get, the more pages you will have to trade with Cheato. If all four are collected, a special song plays.

In Banjo-Kazooie: Nuts & Bolts, Notes are used as Showdown Town's currency: Banjo can buy blueprints, vehicle parts, tips from Bottles, or bribe the police. Bronze Notes are worth 1, Silver Notes are worth 5, and Gold Notes are worth 10. Notes are found scattered around as usual (with 200 per world, and 900 in Showdown Town), but can also be earned from completing challenges, playing Jinjo Bingo, or various other minor tasks. There are a grand total of 5,230 Notes in the game (5,350 with L.O.G.'s Lost Challenges). One should be warned that, if the police are bribed too much, there will not be enough Notes left over to buy everything available (including certain Jiggies). 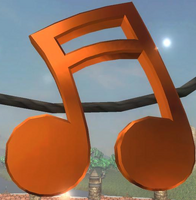 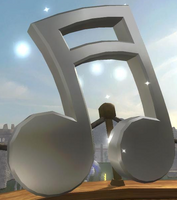 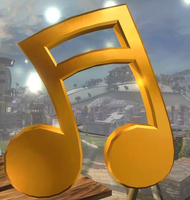 A gold note.
Add a photo to this gallery

A note in Banjo-Kazooie 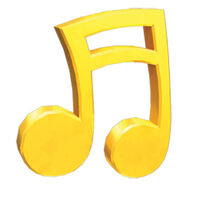 A note in Banjo-Kazooie: Nuts & Bolts

Retrieved from "https://banjokazooie.fandom.com/wiki/Musical_Notes?oldid=46152"
Community content is available under CC-BY-SA unless otherwise noted.