Start a Wiki
Nipper is a giant hermit crab found near the entrance to Treasure Trove Cove in Banjo-Kazooie. He claims ownership of a small beach of land and offers Banjo and Kazooie his assistance in finding treasures, but quickly becomes enraged at the rude little bird's smart attitude and engages the duo in a fight.

Fortunately, his arms have a limited reach, so his violent snapping can be avoided simply by standing a few steps back. Nipper will take a short break after four snaps, leaving his face vulnerable to a quick attack by the Rat-a-tat Rap, while increasing the speed of his snaps afterward. After his face has been hit three times, Nipper will retreat inside his shell and mysteriously disappear. The fastest way of dealing with Nipper consists of entering the Talon Trot while he's swinging his claws. When the oversized Hermit crab takes a break, quickly run at him and hit him with the Rat-a-tat Rap (as it's still usable when jumping in Talon Trot). Run back (normally, entering the Talon Trot takes too long to get out of Nipper's range) and repeat the steps until victory. His shell can then be entered to find Musical Notes, Blue Eggs, two Snippets, and a Jiggy.

Nipper can be found again once Banjo and Kazooie exit the world and revisits his beach; however, his shell will not have the Jiggy inside it.

Nipper is the name given to any various devices for nipping.

The duo fighting Nipper on the beach. 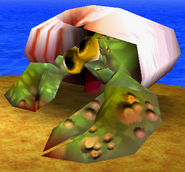 Nipper blinking
Add a photo to this gallery
v •  e

Retrieved from "https://banjokazooie.fandom.com/wiki/Nipper?oldid=44146"
Community content is available under CC-BY-SA unless otherwise noted.