Start a Wiki
Officer Unogopaz is a large tiger-like Moggy who poses as the Kickball Stadium's guard in Mayahem Temple in Banjo-Tooie. He makes sure that no one but Stonies can get in to play kickball.

Banjo and Kazooie try to get in to play kickball, but Unogopaz doesn't let them since the game's tickets were all sold out when they were playing the first game. Banjo tries to plead with the officer to let him and Kazooie in, but still refuses entry. Kazooie then suggests bribery, angering Unogopaz, who tells off the duo and demands that they leave right away.

Once Banjo transforms into a Stony, Unogopaz still sees through his disguise, but lets him pass since there is a shortage of other Stony players in the kickball game.

(When Banjo has turned into a stony)

(When you talk to him as Mumbo) 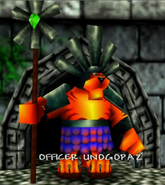 Retrieved from "https://banjokazooie.fandom.com/wiki/Officer_Unogopaz?oldid=44198"
Community content is available under CC-BY-SA unless otherwise noted.