Old King Coal is the boss of Glitter Gulch Mine and is essentially a gigantic living pile of coal inhabiting the boiler of Chuffy the train. He is possessive of his train, Chuffy and thinks that Banjo and Kazooie are attempting to steal Chuffy. After a traditional exchange of lines, he proceeds to fight the duo.

Old King Coal will lumber around the room in an attempt to hit Banjo and Kazooie. His body has no particular weak points and he can be hit with just about any attack. After taking a certain amount of damage, his left arm will crumble and fall off, making him a bit lighter and quicker. He will then start to progressively lose more body parts as he takes more damage including his right arm and his entire top half.

From the moment he loses his first arm, Old King Coal will periodically turn up the heat inside the boiler, making the floor dangerous to walk on and filling the air with suffocating smoke. If the timer runs out (which is highly unlikely), the boiler will be permanently hot and you will have to complete the battle before you suffocate. Pieces of debris amidst the sea of hot coals will offer protection against the heat until it wears off (Old King Coal can't touch them when Banjo and Kazooie stand on those either), but once Old King Coal is down to his last few body parts, the boiler will remain heated indefinitely until he has been defeated, making a quick kill imperative to avoid suffocating. When losing body parts, he initially is unfazed, stating he's at least got another arm, and upon losing that, claiming he won't need arms to beat them anyway. However, once his top half is blown off, he starts showing some concern, when he starts verbally considering that he, Banjo, and Kazooie sit down and negotiate.

While it may be faster to chase Old King Coal and peck him, it may be safer to stay back on the debris and pelt him with eggs, which will still quickly defeat him. It should be noted that he is immune to Fire Eggs. He does however, take extra damage from Ice Eggs.

Upon defeat, Old King Coal lends Banjo and Kazooie usage of his train, as well as a shiny, golden Jiggy. However, he also stated that the condition for loaning it was to not hit anything on the train, as he had just polished it. He speaks on behalf of Chuffy and will even drive the train to them if called from another train station. He also appears in Banjoland as a statue and stands on a pile of crates.

(If Banjo and Kazooie try to use the train before battling Old King Coal):

(Before the boss battle):

(During the boss battle):

(Having granted permission to Banjo and Kazooie for the use of Chuffy):

(If Banjo and Kazooie lose the battle, then return): 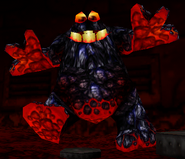 Old King Coal in the Character Parade in Banjo-Tooie.

Retrieved from "https://banjokazooie.fandom.com/wiki/Old_King_Coal?oldid=44829"
Community content is available under CC-BY-SA unless otherwise noted.