Portrait Chompas are skeletal fish-like creatures found in three instances in Mad Monster Mansion. Thet hide in holes in the wall covered by hanging pictures and behave similarly to the Grille Chompa and Big Clucker, waiting until Banjo gets close and then bursting through their paintings, lunging at the bear several times before retreating back (and the painting closing itself up). Chompa paintings are impossible to distinguish from the mansion's many other hanging pictures at a distance, but these enemies are given away by a characteristic growl just before Banjo comes within biting distance. Unlike Limbos, these skeletons will not regenerate and can be taken down easily with a single hit from the Rat-a-tat Rap. 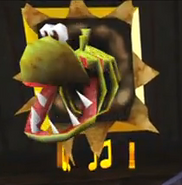