Racing with Boggy refers to a pair sled races with Boggy the Polar bear, first as Walrus Banjo, and then as Kazooie with the Turbo Trainers. This second race is known as one of the most infuriating events in the entire series.

After you have sled into Boggy and unlodge the Jiggy that was in him, he will say he is going to practice sled racing. You can then find him and race him. He is located on the ground floor and up a slope immediately to the left of the path leading up to the entrance pad.

When we first talk to him after helping him out, he says Banjo is too big for the sled. However if Banjo transforms into Walrus Banjo, he will want to race. The flags are all blue but turn red once it is the next pair to go through, then they turn green after Banjo has gone through them. If you fall too far behind Boggy you will lose a life, but if the race is won he will award you another Jiggy. You can then go back to him and race him as Banjo though you will have to race on foot using the Turbo Trainers at the start of the race.

After each race you win, Boggy gives you a Jiggy. This totals up to two Jiggies. 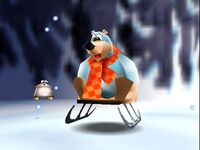 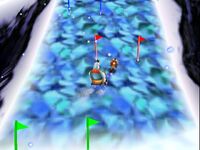 Banjo and Kazooie racing Boggy for the second time while wearing the Turbo Trainers.
Add a photo to this gallery
v •  e

Mini-Games in the Banjo-Kazooie Series

Retrieved from "https://banjokazooie.fandom.com/wiki/Racing_with_Boggy?oldid=46346"
Community content is available under CC-BY-SA unless otherwise noted.