Rare (their full legal name being Rare, Limited) is the video game studio that created the Banjo-Kazooie series.

They also created many other series, such as R.C. Pro-Am, Battletoads, Donkey Kong Country, Killer Instinct, Perfect Dark, and Viva Piñata. They began an exclusive publishing agreement with Nintendo in 1994, which lasted until Rare was purchased by Microsoft in 2002.

After being acquired by Microsoft, they developed games for Microsoft's Xbox line of consoles, including Grabbed by the Ghoulies, Kameo: Elements of Power, Viva Piñata, Banjo-Kazooie: Nuts & Bolts, Kinect Sports, and most recently in 2018, Sea of Thieves.

One of Rare's most critically acclaimed and popular series was the Donkey Kong Country series on the Super Nintendo Entertainment System, due to its use of pre-rendered 3D graphics on a largely 2D console. Rare then released several critically acclaimed games for the Nintendo 64, such as GoldenEye 007, Diddy Kong Racing, Banjo-Kazooie, Donkey Kong 64, and Perfect Dark.

Key members of the GoldenEye 007 development team left Rare soon after beginning work on Perfect Dark. Head of software Martin Hollis was the first to leave in 1998, working at Nintendo of America on the GameCube, and in 2000 he started his own company, Zoonami. Other members, such as David Doak, left soon after Hollis and formed Free Radical Design.

However, prior to both of these events, Rare had already publicly lost staff from other teams. In 1997 a small number of employees (Oliver Davies, Oliver Norton, Steve Patrick, Jeff Stafford, Christopher Gage, and Adrian Smith) left and formed a new studio to be known as Eighth Wonder. They were signed with Sony Computer Entertainment Europe (who made sure this defection was well publicised in the games press) and were all set to develop a new PlayStation game. There were high hopes that this would produce an amazing game; provisionally titled "Popcorn". EDGE magazine even profiled the project, showing a game that looked like a 3D version of Bomberman. However, despite being shown by SCEE at the 1998 ECTS, the game was never released. Eighth Wonder are believed to have experienced a number of internal problems and, by 1999, the studio no longer existed.

Up from the end of 2000, people from Activision and Microsoft visited Rare. In November 2001, Microsoft trademarked It's Mr. Pants, a game that was released three years later. In September 2002, the Stamper brothers sold their 51% interest in Rare to Microsoft; following this, Nintendo sold their 49% stake in the company as well. Microsoft paid a total of $375 million for the company. Because of this, Rare is now a first-party developer for Microsoft's Xbox and its successors. This left Donkey Kong Racing, which was due to be released for the Nintendo GameCube, unreleased. The trademarks of the characters from the games that Rare made for Nintendo consoles (such as Conker of Conker's Bad Fur Day and Banjo of the Banjo-Kazooie series) were retained by Rare through Microsoft (apart from intellectual properties originally developed by Nintendo, including Donkey Kong and Star Fox). Despite the acquisition, Rare still developed games for Game Boy Advance, and now develops for the Nintendo DS, as Microsoft is currently not participating in the hand-held video game console market. Rare has never developed for Sony platforms.

In 2002, Star Fox Adventures became the only Rare game released on the Nintendo GameCube as well as the final Rare game to be released on a Nintendo home console, with an average Metacritic score of 82/100. Rare's first Xbox game, Grabbed by the Ghoulies, was a beat 'em up action game.

In August 2003, Rare and Microsoft made a deal with THQ for Rare to publish games for the Game Boy Advance, which, as of December 2004, have included Sabre Wulf, a game based on its Ultimate character, Banjo-Kazooie: Grunty's Revenge, a "midquel" to the two Nintendo 64 games, and It's Mr. Pants!, a puzzle game that was originally developed as "Donkey Kong: Coconut Crackers", and featured the company's unofficial mascot. January 2005 saw the completion of this deal, with the release of Banjo Pilot (which, before being acquired by Microsoft, was in development as Diddy Kong Pilot"). Rare also ported and extended the Donkey Kong Country series, which was published by Nintendo. 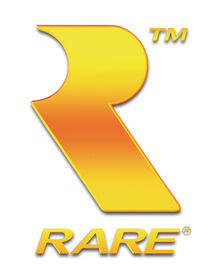 At E3 in May 2004, Microsoft's Ken Lobb stated that Rare had obtained Nintendo DS development kits and was working on two games for the Nintendo DS. Shortly after, Microsoft issued a statement saying that the company and its studios had no plans for Nintendo DS development. However, on 8 July 2005, Rare posted job openings for Nintendo DS development on its official website, and stated that it was "creating key DS titles". The first of these games is Diddy Kong Racing DS, an online-capable port of Diddy Kong Racing. In 2005, Rare released Conker: Live and Reloaded, a remake of the N64's Conker's Bad Fur Day with updated graphics and sound to suit the Xbox and a reworked multiplayer option. Previously due to be known as Conker: Live and Uncut. The game has an average Metacritic score of 78/100. Rare made something of a resurgence when Microsoft's Xbox 360 console was released in late 2005. Two of the Xbox 360's launch games were developed by Rare, Kameo and Perfect Dark Zero, with Viva Piñata released the next year. The third Banjo-Kazooie game, Banjo-Kazooie: Nuts and Bolts, was released in November 2008.

After Microsoft's Xbox Kinect peripheral was announced Rare became primarily focused on the hardware, releasing the sports mingame collection Kinect Sports as one of the device's flagship launch titles in November 2010. On January 2, 2007, Rare founders Chris and Tim Stamper left the company to "pursue other opportunities". Previous lead designer Gregg Mayles reviews as Creative Director. Mark Betteridge became Studio Director at the company, but was later replaced himself by Scott Henson from Microsoft Games Studios in 2010. The company's logo was also changed in 2010 to be more abstract, featuring a negative space Rare "R" shape in various brightly coloured polygons and the company's name written in grey, rounded text.

During the E3 2015 at the Microsoft Press Conference Rare announced, along with Rare Replay - a Collection with 30 classic Rare Games - also a Pirate MMO Sea of Thieves, a new Logo, resembling the 1994 incarnation.

During the Ultimate Play the Game years, the company gained an international reputation for being media shy. The company itself being understaffed, did not commit themselves to trade shows and only granted interviews once their current project was completed. Tim Stamper said in a CRASH interview that the only time off they had during the Ultimate years was two Christmas mornings. They worked all seven days a week, and the only hours in which they did not work were 2:00-8:00 am.

Rare released a VHS tape that could be obtained via mail-in request with the purchase of Donkey Kong Country. The video details the game's creation and shows the animal models Rare used. At the end of the video, the host and some others are seen playing Killer Instinct. They quickly look at the cameraman before pushing him out a door and closing it as the video ends.

In the early 1990s, Gamesmaster was one of Channel 4's biggest shows and was wanting to profile what went on inside Rare's. However, Bad Influence, a rival show—aimed for a much younger audience—was also keen to film a piece on the company. In not wanting the hassle of having two separate TV crews come and visit, Rare's management came up with a plan. They would grant a filming request only to the Yorkshire Television production team that made Bad Influence, on the provision that the show would then provide Gamesmaster with selective clips of what they filmed. Further clips would also be used to cut together the aforementioned promotional VHS tape.

The plan, however, backfired, when Gamesmaster's producers took offense in losing out to a rival show. Dominik Diamond was always known as a provocateur and as such insisted in vocalising his irritation in the way the show had been shunned by describing Tim and Chris Stamper as the "Physically unattractive Stamper brothers" in his voice-over. Since the broadcast of this episode to an audience of three million viewers, Rare turned their back completely on the broadcast media.

Web video shows have been granted access in recent years, such as Eurogamer in November 2006, The 1UP Show and GameSpot UK's Start Select in May 2008.

Three games developed by Rare have been released on Nintendo's Virtual Console service. They are the three Donkey Kong Country games originally released for the Super Nintendo Entertainment System from 1994 to 1996. Rare stated on their website, "...it's ultimately Nintendo's decision what gets released (on VC). Beyond the DKC games, we don’t have anything in the pipeline at the moment, but that doesn't mean it won't happen in future."

Jetpac (released by Ultimate Play the Game in 1983) was released for Xbox Live Arcade on March 28, 2007 as Jetpac Refuelled. In this release, the game was updated with overhauled high-definition graphics and also included Xbox supplements (leader-boards, achievements).

GoldenEye 007 was set for release, Microsoft approached Nintendo with a deal that would allow the game to be released on both Xbox Live Arcade and Nintendo's Virtual Console, but Nintendo refused this offer.

Retrieved from "https://banjokazooie.fandom.com/wiki/Rare,_Ltd.?oldid=46827"
Community content is available under CC-BY-SA unless otherwise noted.