Start a Wiki
“Please help me! Because if I die, your garden will smell of dead fish.”
—Roysten, Banjo-Tooie

Roysten is Banjo's pet goldfish. He appears in every game in the Banjo-Kazooie series, but is usually a minor background character (except in Banjo-Tooie), serving little purpose aside from showing up in humorous/dangerous situations.

He appears on a shelf in Banjo's House swimming around unhappily, then tapping the glass of his cramped bowl. Near the end of the game, Mumbo Jumbo is seen grilling Roysten on a barbecue.

In Banjo-Tooie, Roysten is knocked off the barbecue (although you can see him in Banjo's House in the introduction) when Gruntilda blows up Banjo's House and gets trapped under a boulder that must be smashed using the Bill Drill ability.

Once Roysten has been rescued and released into the moat around Spiral Mountain, he teaches Banjo and Kazooie how to swim faster and increases their oxygen from 6 to 10 bubbles. When Mrs. Bottles makes Bottles eat his burnt dinner, Roysten can be seen on the plate blinking and burnt.

Interestingly enough, while he is seen on Bottles' plate, Roysten is the only character never named in the Character Parade.

Roysten can be seen on a shelf where achievement ribbons and trophies are gathered in the trophy room.

Roysten makes a cameo appearance in two other Rare titles, Grabbed by the Ghoulies, where he can be found in the Ghoulhaven Hall as an easter egg and tip his bowl much like he did in Banjo-Kazooie, and Viva Piñata, as a decorative item. In Yooka-Laylee, the spiritual sequel to the Banjo-Kazooie franchise, the character Dr. Puzz, an analogue to Mumbo-Jumbo, has a goldfish swimming in the water inside her helmet. This goldfish has a distinct resemblance to, and is believed to be a nod to, Roysten. 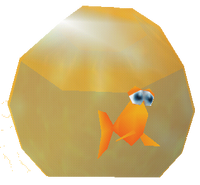 Roysten in his fishbowl in Banjo-Kazooie.

Roysten in Banjo-Pilot.
Add a photo to this gallery
v •  e

Retrieved from "https://banjokazooie.fandom.com/wiki/Roysten?oldid=43971"
Community content is available under CC-BY-SA unless otherwise noted.