In Banjo-Kazooie, the Rusty Bucket is the main feature of the appropriately named world of Rusty Bucket Bay. It appears as a large cargo ship in an extremely polluted industrial harbor. Its main deck is covered with floatation ring-like and periscope-like enemies. It also contains a number of rooms and cabins. Other features such as whistles, ladders, smokestacks and coolers are also found on deck.

The Engine Room is commonly dubbed the hardest area to navigate in Banjo-Kazooie. It is a large room containing giant cogs and gears. The player is required to press a button in an adjoining room to slow the fan blades in order to get a Jiggy. If the two switches are hit, then the ship's propellers will stop for 65 seconds allowing the player to get the Jiggy from behind them. This is often referred to by players as the hardest Jiggy to acquire in the game. The threat of falling, constantly moving parts, and difficult enemies are what supposedly makes it so hard.

The Anchor Room is a room located in the hull of the ship. Underneath the ship the player will find a dolphin named Snorkel trapped under an anchor. The dolphin asks that Banjo and Kazooie release him by hitting the Anchor Switch. In order for the player to reach the Anchor Switch, he or she must climb into the hole in which the Anchor is stored, make their way passed a line of Grille Chompas and hit the anchor switch, thus freeing Snorkel and getting a Jiggy.

The Rusty Bucket also contains the Captain's Cabin, a Map Room, a Bunk Room, a Galley, and a room containing numerous pipes.

A model of the front half of the Rusty Bucket appears in Banjoland as an exhibit with a huge hole in the hold, which rather comically features a message stating that it was too hardcore for today's modern players. The real Rusty Bucket appears in the background when looking out past the Docks in Showdown Town (except it is missing a smokestack, due, surely, given the low graphics level in Showdown Town's backgrounds).

"This ship was the basis for an entire Banjo-Kazooie level, Rusty Bucket Bay. The Jiggy in the bowels was one of the most difficult in the game. Far too challenging for today's soft gamers!" 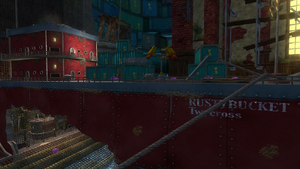 The Rusty Bucket as it appears in Banjoland.
Add a photo to this gallery
Retrieved from "https://banjokazooie.fandom.com/wiki/Rusty_Bucket?oldid=46489"
Community content is available under CC-BY-SA unless otherwise noted.