Banjo-Kazooie (XBLA)
Rusty Bucket Bay is the eighth world in Banjo-Kazooie. It consists of a cargo steamboat called The Rusty Bucket, its dangerous internal workings, rooms on the ship itself, and the polluted water and harbor that surrounds it. The entrance to this world is located on the seventh floor of Gruntilda's Lair, through an underwater passage. However, the water level is too low on the duo's first visit and requires the water level switch in the graveyard section of Gruntilda's Lair to be activated first. Its picture is located high above the entrance through a small alcove. This can be reached either by activating the second water switch in the same room or by swimming into the next room and finding another tunnel with a breakable grate. Both lead to the same area and the picture is behind a breakable grate. The picture requires 12 Jiggies to complete. 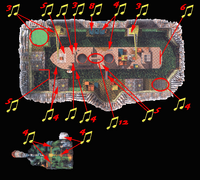 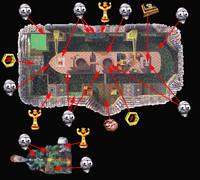 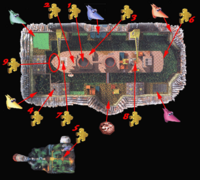 In Banjo-Kazooie: Nuts and Bolts, a ship that bears some resemblance to the Rusty Bucket can be seen floating across the ocean beyond Showdown Town. It also appears in Banjoland as an exhibit. It has a hole in its hull to allow a view at its engine.