In 2007, Emilio Lopez, a professional freelance artist who worked on a development team for a Banjo-Kazooie animated series[1] that was going to coincide with the release of Banjo-Kazooie: Nuts & Bolts.[2] Microsoft and Rare themselves were okay with the ideas the development team sent and experimenting with the artstyle for the project,[3] it didn't need to look the same as the game.[4] The project for the animated series went through a lot of revisions but wound up falling apart which led to result of the animated series fate being scrapped.[5] 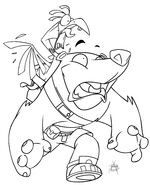 Concept artwork of Banjo and Kazooie by Adrian Barrios

Concept artwork of Banjo by Keith Conroy.
Add a photo to this gallery

Retrieved from "https://banjokazooie.fandom.com/wiki/Scrapped_Banjo-Kazooie_animated_series?oldid=44823"
Community content is available under CC-BY-SA unless otherwise noted.