Sir Slush the Snowman is an enemy found in Freezeezy Peak and the winter season of Click Clock Wood. There is also one just outside the Freezeezy Peak entrance in Gruntilda's Lair. This baddie is no Frosty the Snowman, as he laughs menacingly while he rolls snowballs and tosses them directly into Banjo and Kazooie's path. Fortunately, just touching Sir Slush is not enough to hurt Banjo and will merely send the bear bouncing backwards. However, doing so is not advisable, especially if freezing water or a long fall are nearby.

Sir Slush is immune to all ground attacks; even the Wonderwing is ineffective. The only way he can be harmed is by using Kazooie's Beak Bomb ability to aim for the big red X on his top hat while flying. Although aiming for such a small target can be difficult, especially since Sir Slush wiggles around while rolling snowballs, he remains a stationary enemy and is unable to move out of the way. Once Banjo has effectively landed a Beak Bomb on Sir Slush's noggin, the snowman will explode in slushy snow-white goodness while Banjo ejects his characteristic "Duh-hut!" shout. 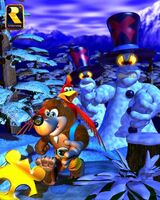 Banjo, Kazooie, and two Sir Slushes in a promotional image of Banjo-Kazooie.

Sir Slush Got the Revenge In the Rare Season's Greetings Logo!
Add a photo to this gallery
v •  e

Retrieved from "https://banjokazooie.fandom.com/wiki/Sir_Slush_the_Snowman?oldid=45894"
Community content is available under CC-BY-SA unless otherwise noted.